Intelligently Numbering “remarks” only when multiple are made

Problem. I am using the amsthm package, and have remarks after theorems.

If there is only one remark between two theorems, the remark should not be numbered.

If there are multiple remarks between two theorems, they should be numbered (with the counter reset with respect to the theorem counter).

I have two environments to handle this, rmk and rmk*, but can I have only one?

(If anyone is curious, I'm typesetting some work by Euler, and he does this with Scholium numbering. But I'm also thinking about doing this with my own personal notes, which is why I ask for a robust single environment solution...)

Minimal Working Example. For what I do now, here's a minimal working example using a workaround. But it's unpleasant when I add more remarks to a theorem to remember to change rmk* to rmk.

The following example patches \@thm that is defined by amsthm to remove the number, if there is only one entity.

If the theorem entity has reached number 2, then there are multiple items and a label is written to the .aux file using the theorem name and number as key.

In the next LaTeX run, the existence of this key is checked for the first item and the number is suppressed, if the label exists and there are multiple items.

There exists an unofficial package named corollaries exactly for such a case. I've been using it for more than a year. It should soon be proposed on CTAN, but author doesn't have much time to finish the doc in English. For the moment the documentation is in French (1½ page only).

It defines three new commands, newcorollary , and for arbitrary counters (previously defined with \newcounter): DeclareCorollaryCounter and \AddToCorollaryReset. In your case, you should just write, supposing you also have a prop environment:

This defines a rmk counter which 1) is set to 0 each time the thm OR prop counter changes; 2) is not displayed for a lonely remark.

Here is an excerpt from the doc: 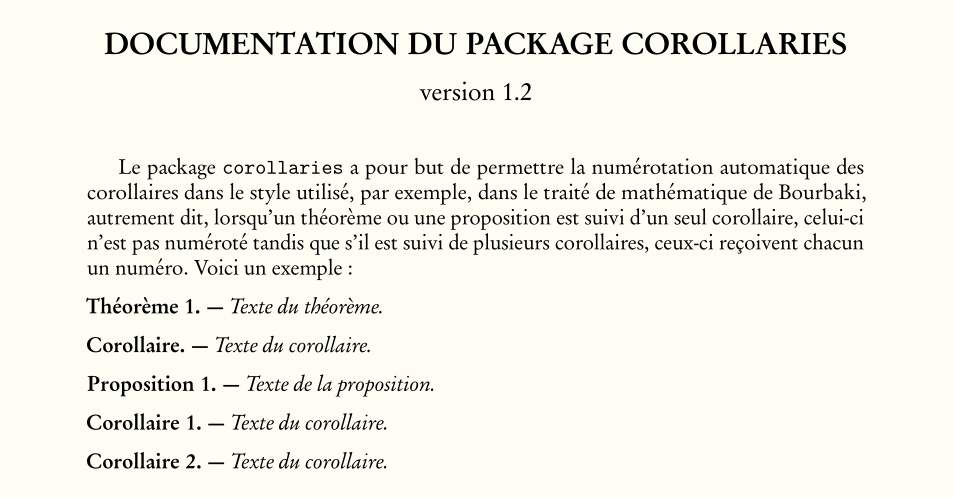 Translation of the introductory paragraph for non-French speaking readers:

The corollaries package aims at allowing automatic numbering of corollaries in the style of, for instance, Bourbaki's mathematics treatise — in other words, when a single corollary follows a theorem or a proposition, it is not numbered whereas if there are several ones, each has its number. Here is an example:

Not the answer you're looking for? Browse other questions tagged theorems amsthm or ask your own question.

7
What’s the most straightforward way to typeset theorems etc. when the numbering is entirely manual?
4
Amsbook: Theoremstyles definition and remark identical?
13
Not numbering Remarks
7
Can't get babel and amsthm to play nice once Hebrew is loaded
0
Customizing theorem list
3
amsthm: Punctuation only when there is a title
3
Numbering of newtheorem
0
Remarks are not italicized while using amsthm package
2
How to rename theorem when * is added