Feynman diagrams with feynmf/feynmp - edges of diagram cropped off?

I am trying to create Feynman diagrams with LaTeX/MetaPost and feynmp seems like the perfect package to do so. I had no problems with the tutorial and can generate the diagram itself in .eps without problems. But once I started labeling each diagram, the edges of the diagram get cropped off like this: 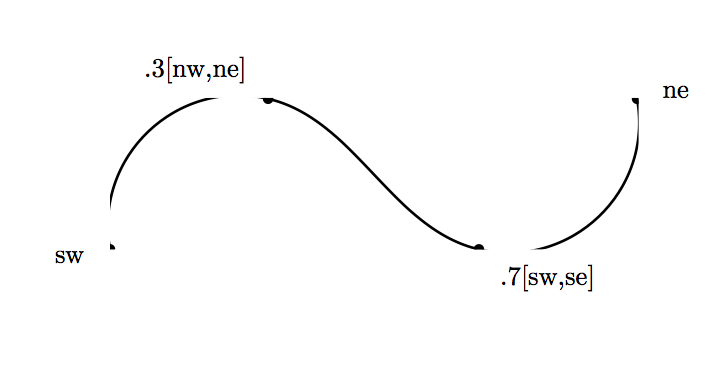 What am I doing wrong? Here's my code:

Indeed, compiling the example file with latex and dvipdfm gives the wrong result; I don't know why, but the support of EPS files within dvipdfm is not really good and also in other cases I had problems. For instance, when I was developing gmp, in order to get compatibility with XeLaTeX, that uses xdvipdfmx internally (which in turn is based on dvipdfm(x)), I resorted to convert the files output by Metapost to PDF before inclusion.

So I'd recommend using pdflatex for this job. The problem of including the MPS file output by Metapost is easily solved by adding

to your preamble. Another way, which is even better, is to use feynmp-auto that does two things:

The only thing that's needed is to run pdflatex twice (the second run is needed only if Feynman diagrams in the document have been changed).

Another thing to note is that the code is wrong in two respects: it's a bad idea to globally redefine \P just for that job, because you will incur into problems when using the normal \P command. You can redefine it locally, but it's better not doing it. The same holds for \L. Note also that \noexpand in that code is wrong.

Not the answer you're looking for? Browse other questions tagged pdftex labels feynmf feynman or ask your own question.