Is there a LaTeX wrapper for use in Google Docs?

I collaboratively edit documents in Google Docs. Unfortunately, there are no LaTeX macros/wrappers I know of for Google Docs. So, editing a TeX file on Google Docs is like going back to the old days when you had to edit LaTeX in plan text.

Does anybody know of a LaTeX wrapper for Google Docs/Drive?

For all math equations typeset in MathJax/LaTeX, the Auto-Latex Equations add-on for Google Docs is free and works brilliantly. It simply replaces all your math with high-quality images of the equation.

All you have to do is type an equation within delimiters, like $$55 + \sqrt{5}$$ and it can be rendered in super high quality at whatever time you like by rendering all the equations in your document. If you mess up, you can always undo one or all the equations.

You can get it for free at the Google Docs add-ons store.

Unfortunately, LaTeX Lab has been declared deprecated by its developers. This seems to be a results of Google's massive API changes in recent versions of Google Docs. There is a vast number of LaTeX-Lab-like wrappers for Google Docs whose developments has ceased due to that fact.

If you want to have integration with Google Docs you may want to use LaTeX Lab (offline). From the Google Code project site:

LaTeX Lab is an open source implementation of a web based LaTeX editor for Google Docs.

Some other popular online editors are:

As of September 2019 the site is not reachable anymore (the name does not exist: https://downforeveryoneorjustme.com/weavr.co.uk)

Following from the @aaron terse answer, I have been using http://weavr.co.uk/...

Also check out Authorea. From what I understand it is similar to Overleaf and ShareLatex mentioned by @HenriMenke above.

We have just launched a Google Docs-add on which combines power of LaTeX and ease of a word processors and cross-referencing too.

I love Weavr, and use it extensively. However, in Ubuntu 14.04, if you have fully working texlive installation, you can also "roll your own" so to speak by using a script. Mine, which I called "glatex.sh", looks like this:

The bom-romove script is set out in this post bom_remover It is necessary because gdocs downloads with a "bom" included, which LaTeX will choke on.

Make both bom-remove script and glatex script executable (chmod +), and then either put them both in /usr/local/bin or put an alias to each there.

To use: a) Make a google doc, share it as a link and copy the link id b)on the command line, type your script's name, the link id, and a name for your local file, then Enter

This will then download the google doc, name it and compile it as tex file, produce a like named pdf file and then pop up evince with the pdf loaded. To refresh when the google doc is changed run the script again.

For those who might want to use a "beeline reader" effect, I adapted @phg's solution which is in LuaLaTeX. To do this I made 4 bash script files, two for black/red/blue beeline, and 2 for just black.

The reason for the black script files is that the header cannot be in the LuaLaTeX file containing the text, your header has to be set out in a separate document that calls "beegradients.tex" which I wrote into the bash script files texscript.sh (black) and color-texscript.sh (red/black/blue). These have to be used with glatex-beeline.sh and color-glatex-beeline.sh in order to work. If I didn't make a black color version of the files, I would have to cut and paste the header from color-texscript.sh to my document in order to allow it to compile. It seemed easier to just make a "beelines" version in black instead.

Please note that for some reason I had to make links to beegradients.lua and beegradients.tex and those links had to be present in my compilation directory.

To create "beelines" pdf's make sure all the *.sh files are in a system wide directory, (eg, /usr/local/bin), fire up your terminal type

and it will produce a *.tex and a *.pdf and then pop up the pdf in evince pdf viewer.

For the black version of the same document do the same thing using glatex-beeline.sh

I have only tested this on Linux.

The scripts are set up expecting a file named "abbrev.tex" containing "abbrevs" package abbreviations. The

corrects for a bug that mis-spaces commas after abbreviations. LuaLaTeX complains about this, but I don't know what to do about that.

As of Oct 2019, Google's new equation editor (Insert -> Equation) supports rudimentary LaTeX commands, for e.g., _ (underscore) will get you to subscript mode, \sum gets converted to summation sign etc. This was good enough for me.

I wrote a Google Docs add-on called Articul8. It allows you to incorporate LaTeX equations into your Google Doc, as well as to export the document to TeX (images included, cross-references intact). You can render the document locally or upload to an online service (e.g. Overleaf).

I'd be very happy to hear how this works out for people, and for any suggestions!

The g(math) plug-in works really well for me.

It has a simple interface where you can enter some LaTeX code and then insert it as an image into your Google Doc. This with suggestive formatting makes adding LaTeX to your Google Doc a breeze.

Exist also EquatIO - Math made digital, from Chrome web store, where it is possible to create easily mathematical equations, formulas and quizzes. 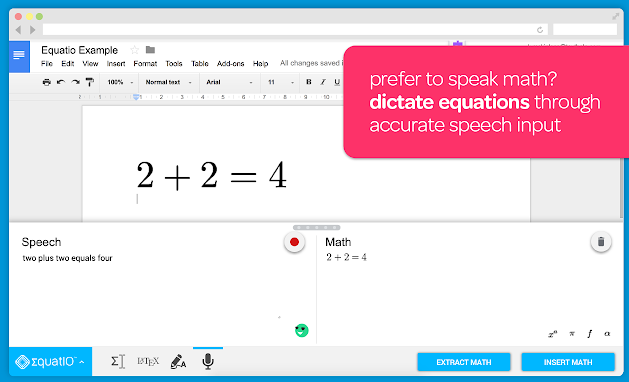 I remember that EquatIO it is free for 30 days, with unlimited access to all features. After this time it requires a licensing subscription.

For Google Suite there is also Math Equations 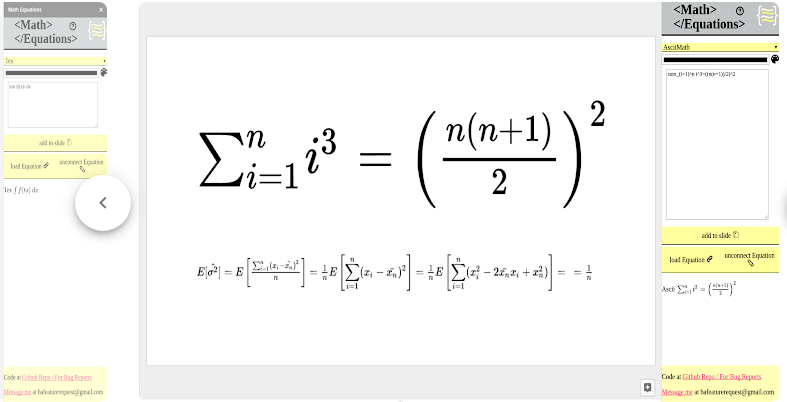 There is an Android app called 'math2slides' which converts LaTeX code to Google Slides shapes, so you can insert and manipulate equations (resizing, changing colors, splitting, etc) in your presentation without losing quality. Once it is in Google Slides, can be easily copied and pasted into a new drawing in Google Docs. The advantage of pasting a drawing (shapes) with respect to simply pasting an image is that you don't lose quality when resizing, and you can also edit the equation (changing the color of some symbols, etc).

I also like the idea to work collaboratively using LaTeX using web resource. I do not think you can do much with GoogleDoc - you need to redo a lot in Google doc to create an article.

However, you can also use HandWiki (https://handwiki.org). It's a wiki, similar to Wikipedia, but you can export your wiki to a Latex documents (including equations, figures, tables and even BibTeX citations)

Not the answer you're looking for? Browse other questions tagged editors or ask your own question.

43
How to convert a Google docs document to LaTeX?
15
Per line text gradient (ala beeline reader)
0
Online latex editing for large groups/large documents

882
LaTeX Editors/IDEs
14
Editing *existing* multipage TeX tables in a spreadsheet-like interface?
5
Is LaTeX the best option?
4
(Customizable) LaTeX equation editors for students
6
Is there a visual editor for LaTeX that allows for graphical editing of the layout elements (like margins, headers etc)
3
Why does Vim force really long lines in text file?
16
LaTeX plugin for IntelliJ IDE (and others from JetBrains)
0
Is there a LaTeX editor that lets you compose directly in the output?