I would like to give me an example of how to use the polynom package. More specifically, I want to write down on my latex editor the following polynomial division (source):

It looks like people did not sure whether this is a "do for me" question or you are asking anything else. Let me start to clarify something...

First you mentions polynom, which is good at creating long division 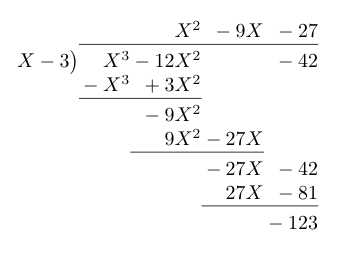 But its output is relatively difficult to modify since it is hard-coded using tabular internally. You would need to rewrite the output scheme. If it is not the desired, the remaining problem is whether you prefer polynom's default output or the cross one you provide?

Second, Mathjax, though extremely convenient over HTML, uses its own engine. It supports small amount of packages by rewriting them case by case. (Which may save some resources since one does not need line-breaking/page-breaking/etc anymore.) Thus it is hard to create a consistent user experience between MathJax and polynom, a probably-will-never-support package. You might either