I would like to create figures with tikz as seen in the graphic below. The main idea is, that between two lines I sometimes want to copy nodes, which is easy. And sometimes I want to put into the horizontal space of a node on one line new nodes on another line.

Also it would be nice if I can insert horizontal rules between the lines, but I didn't do that so far.

I hoped there would be a nicer solution to create these figures. I tried with tikz-chains. I thought about tikz-trees and matrices, but couldn't think of something. I would be grateful for suggestions on how to create similar figures with less fiddling. A solution with tikz would be nice, but I also accept other ways.

If you are not looking for an automatic or recursive solution, I think that positioning library is flexible enough to help you.

What I did in next code is first positioning central nodes and later positioning parenthesis nodes. I don't know if this is what you want.

Regarding to horizontal rules between lines there are several ways of drawing them. Here I've used an auxiliary coordinate node and intersections (|- or -|) to delimitate them. 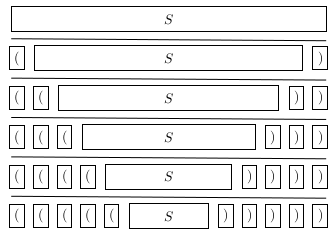 5
How to have one straight arrows surrounded by two curved arrows (TikZ)
6
Beamer TikZ change anchor
9
Changing the indentation of a Tikz tree
6
anchor arrow start position
20
How to define the default vertical distance between nodes?
8
tikz and \pgfdeclareshape why the text is not at the center anchor?
6
How to position an element relative to an anchor?
6
"Dividers" with TikZ
0
TikZ - vary node positioning depending on shape size / anchors
3
Document header with tikz