I would like to build a macro that correctly identifies the context within which it is being called and appropriately set modes and font size according to context.

Yesterday I started building a macro to draw an arc symbol over the names of points. But then I realized it wasn't aware of whether it was being called from within math mode or not. So I decided to add such features.

Of course I had to try to figure out how to break it. So the examples here are just a few where I'm finding contexts in which macro seems unaware of its proper context. 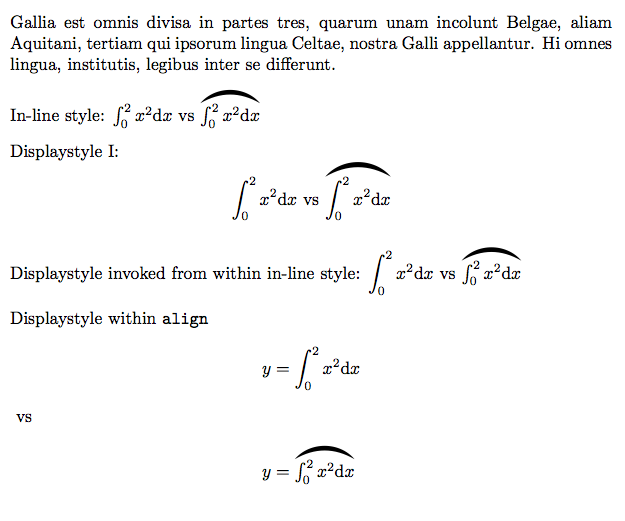 I was not expecting my macro no ignore the \displaystyle switch. That prompted me to test it out in an align* environment. Other contexts I'm aware of are numerator/denominators of fractions and super/subscripts where font sizes are scaled: I don't know how to test for any of these.

So I've got a bundle of questions which seem very closely related:

I know it's generally frowned upon to post multiple questions in single posting, but these questions seemed to be so closely aligned that putting them together made more sense to me than separating them. However, if the community would like me to post them separately, I will certainly edit my question and do so.

Finally, I'm not really concerned with the visual aesthetic of this particular macro. This is a purely educational exercise. I'm not planning on arcing my integrals!

The answer to all the questions is basically: you can't. It is all to support the primitive \over syntax which means TeX does not know at the point the commands are executed what mode it will end up in.

this is why there is \mathchoice that sets the command 4 times into 4 internal boxes, using all 4 styles display text script and scriptscript and later TeX choses one of the boxes depending on which style is required.

In addition \ifmmode does not reliably tell you that you are in math mode unless you use \DeclareRobustCommand or etex \protected\def otherwise at the start of an alignment cell in an environment such such as align or array it will expand to false while Tex is looking for \omit even though if \omit is not there and the cell starts math mode will be started by a $ inserted by the alignment template.