I am trying to reproduce a term from an old Siṇhala-English dictionary. I have checked several fonts and the best candidates for the job seemed coming from the Bhashitha font family. The font contains some ligatures. The question is how to get them automatically?

I've tried to typeset nimnasthaana with the help of Lexilogos. The term is mentioned on page 289 in the book (it's page 597 of 1676 in the PDF file), the ligatures are the second and the third letter. I am getting line one in the example below.

I know that the first consonant in consonant conjuncts is without virama, therefore instead of nimnasthaana I used nimanasathaana (m -> ma and s -> sa). I am getting the second line and I am closer to the wanted visual form, but I am pretty far from getting those two ligatures.

I cannot copy glyphs directly from the PDF file, we would get ^Saaeoftos?, it is a result of OCR containing only Latin letters.

we are getting this information:

I've tried several way to turn on zz01 (as a language, script, feature, rawfeature), but it didn't help me much with getting ligatures.

My problem seems to be more general. It is likely that some old ligatures are not present in the font, so I tried to get mra (ම්‍ර). When I tried m+ra or ma+ra, I am getting two separate glyphs. If I copy the final glyph from Lexilogos, the typesetted result is all right. Also, if I use \char"E168, the glyph is there as well.

It's likely there is a better font and/or way for this task, the Bhashitha font family is the Level 3 font, it's probably the best font we could get these days. Still, my next step would be to check fonts from http://www.kaputa.com/sinhalaunicode/sinhalafonts/, but it's hard to say if I can improve my current state.

Edit: I've checked those fonts manually and it looks none of them is the Level 3 font. The biggest file in size is [Thara](http://www.kaputa.com/sinhalaunicode/sinhalafonts/fonts/THARA.zip; 930 KB), but even that font contains only a basic set of glyphs.

I am enclosing an example and a preview of my efforts. The first preview is from xelatex, the second picture is a result without compositions/ligatures after running lualatex. My last screenshot is a proof that some old ligatures are present in the font. 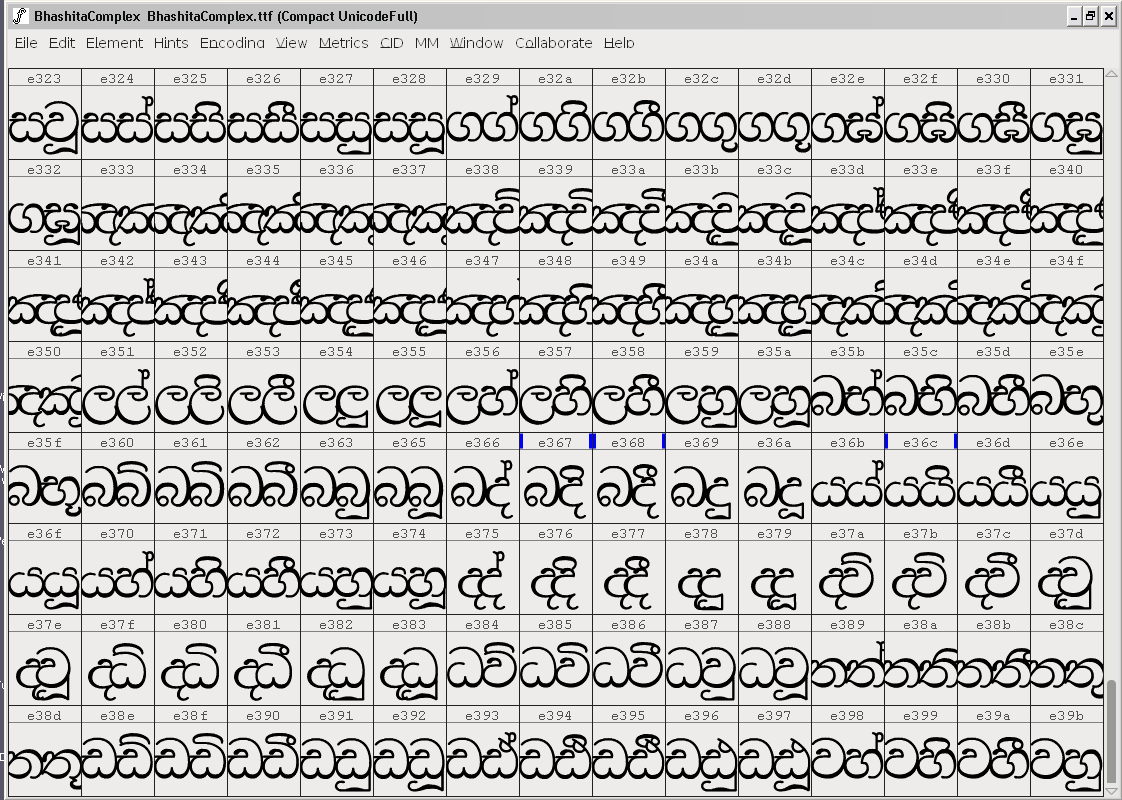 Update: I've changed Language=Sinhala to Script=Sinhala and the output from lualatex is equal to the one from xelatex.

You can use the style file created by Anurudha. He called it sinhala.sty. (In my code I renamed it sinhala1.) I used the remove thin space command to get two letters close together. I assume that there are ways to get two letters close together as precisely as you want. But, I have not found them yet. Below is my code and the output. (I used the Real Time Unicode Converter to get the sinhala words.)

Edit: I followed the advice given in a comment to replace the remove thin space command with a better command of \kern to create the "bandi akuru" (biniding letters).

Not the answer you're looking for? Browse other questions tagged fonts xetex fontspec ligatures or ask your own question.

6
Fix ligature mapping of obscure old font with LuaLaTeX or XeLaTeX
23
How to enable ligatures for emdash/endash in LuaTeX ?
16
Easily assign undefined ligatures with pdfLaTeX?
5
Monotype Gill Alt One MT and the fi fl ligatures
4
XeLaTeX and Roboto: No Ligatures
28
Complex ligatures in Devanāgarī
8
Ligatures for fi, fl, ffl do not work for Times New Roman (XeLaTeX)
8
Historic font and missing ligatures
0
TeX Gyre Termes' ligatures work in LuaLaTeX, but fail in XeLaTeX