I'm trying to get two arrows to be spaced equally from each other. Currently I'm drawing two separate arrows using \draw with [out=-180,in=-180,distance=3cm] where I play with the distance until the two arrows more or less line up.

Below is a screenshot of what I have but I can't seem easily have the two arrows line up perfectly. Also if I change one arrow I have to change the other arrow as well manually. Any tips would be appreciated 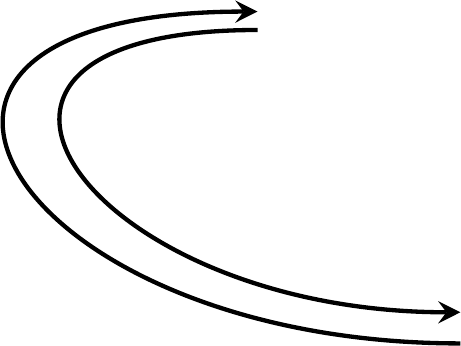 I do not think that it is possible with just two to operations. The inner curve is smaller in height and width – that could be handled by a transformation. But the horizontal distance between the start and end point remains the same.

The following example therefore only draws one curve. First pretty thick to cover both lines. Then the same path is used to clear the space between the lines by drawing a white line with smaller line width.

My PDF viewer showed a small glitch, at the start and end points a pretty thin black vertical line remains. Therefore they are overwritten with white lines to the right.

At last the arrow tips are added. Depending on the kind of tip, the very end also needs some whitening before, because the tip might be thinner than the black line width. 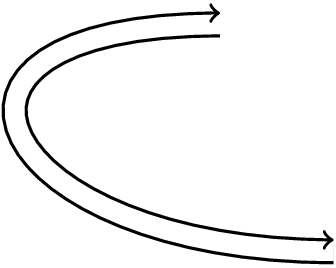 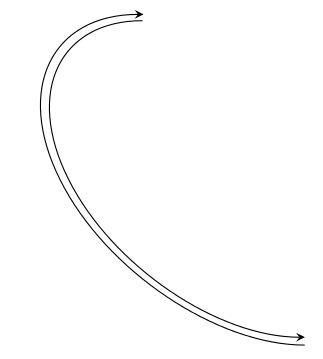 14
Rotate a node but not its content: the case of the ellipse decoration
5
How to have one straight arrows surrounded by two curved arrows (TikZ)
21
How to define the default vertical distance between nodes?
2
Tikz: Lining up input and output nodes in multiple input multiple output diagram
18
TikZ: Drawing an arc from an intersection to an intersection
9
Line up nested tikz enviroments or how to get rid of them
2
LaTeX Tikz: Compare two \def arguments
3
Arrow between BTrees
3
Document header with tikz