Differences of fonts in math and text mode

I have not yet found an explanation why we have different font types in math and in text mode. It seems reasonable to ask for the differences between the default math and text font. Is the answer that in the math environment no ligatures are desired?

In the end I want to make the decision whether it is reasonable to have a different font between both of them or not.

If I understand your question correctly, you're asking why TeX uses different fonts for (Latin-alphabet) letters and numbers depending on whether they are set in text or math mode. Put differently, if a well-designed math font happens to contain all letters, digits, and punctuation marks that can possibly occur in text mode settings, why not use this math font for text mode too? Why use two different fonts in such cases? (Of course, math frequently also requires symbols -- e.g., summation and integral symbols, fraction bars, and primes -- which don't occur in text mode at all. I take it that symbol fonts are not a part of your question.) 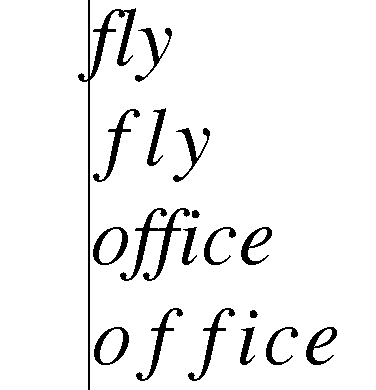 Finally, here's the code used to generate the example shown above.

It's hard to answer as traditionally using the same font wouldn't have been an option at all, you simply need too many symbols. Consider the small document

That uses 5 fonts as the output shows:

Classic TeX simply uses too many characters to fit in one 8bit font.

Perhaps you were mainly just asking why the math italic font is different to the text italic? There mainly the difference relates to teh fact that in text adjacent letters form a word so the letters have small sidebearings so they are close together and some combinations are merged with ligatures or brought closer with kerns. Math italic conversely adjacent letters are typically an implied product of separate variables and the design tries to make them not look like a word: wide sidebearings and typically no ligatures.

With a modern Unicode font there are of course possibilities to put many glyphs into the same font but that is just an implementation issue, you would still want different glyphs, perhaps using an italic font with U+0061 for an a and U+1D44E for a math italic a, so even though they are two a in the same font, they are different glyphs, just packaged into one big font rather than lots of small ones.

18
Using several math fonts with unicode-math
7
Math notation and Fonts
2
use my selected \sffamily fonts for \mathfs
0
Problem controlling weight and style of math fonts
2
Garamond and math fonts
0
How can I use multiple math fonts?