I am using lhs2TeX to convert code into LaTeX. It typesets code into math mode. As I am also writing math formulas in the same document, I use unicode-math to switch between different math mode fonts in order to make the two things more distinct (and also to use Unicode symbols in my math).

The problem here is that with unicode-math, \mathit does not work correctly. I am unsure whether this is a problem with unicode-math or the OpenType math fonts, but the bottom line is that it does not typeset its argument as text but like a formula, with additional spacing between the letters. I also found a bug report on this.

I could redefine \Varid with \textit, but this leads to another problem: There are a lot of subscripts in my identifiers, and as the underscore doesn't do subscripts in text mode, this doesn't work. At least not without me overriding every identifier with custom TeX to fix the subscripts.

Here is an example demonstrating the problem.

Edit: A main problem here, that unfortunately isn't part of my example, is that the TeX code inside \Varid (which can be redefined) is usually automatically generated and often contains _ for subscripts (or else must be rewritten manually for every identifier which I try to avoid). So using \text instead is problematic.

This is the consequence of a bad decision in unicode-math: they named \mathit the normal math italic letters, instead of respecting the LaTeX convention of referring to them as \mathnormal; \mathit should choose the text italic font, in order to make unicode-math a drop-in replacement.

I wouldn't expect different output when unicode-math is loaded or not; but this simple example shows the bug:

If the line with unicode-math is commented out, we get 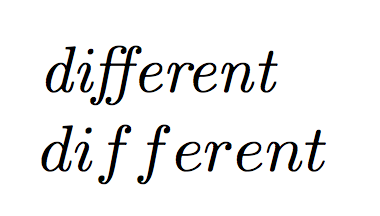 If I uncomment the line, I get 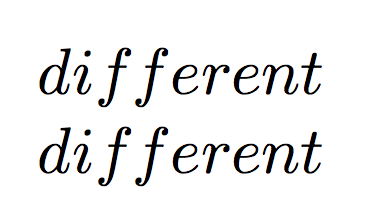 which is definitely wrong.

If you use lhs2TeX, you can add

This shouldn't raise the Too many math alphabets error; if it does, then add the code you find between \makeatletter and \makeatother in https://tex.stackexchange.com/a/100428/4427

Not the answer you're looking for? Browse other questions tagged math-mode xetex unicode-math opentype lhs2tex or ask your own question.