error when using tikz with quotes and angles

i want to draw some angles using tikz where i have the following code:

i first had to update my pgf-package (which i believe i successfully did), because apparently this "angles"-thing is quite new.

now i've looked in a lot of forums and this concept always seemed to work. for me it also does, but only if i leave out the optional argument "name" to label the angle. with this as an argument, as in the code above, i get an error-message that says:

i dont understand this error-message. what have i done wrong?

i believe the syntax to be ok, because i more or less just copy-pasted the code.

i also updated pgf twice - in admin- and nonadmin-mode, so this should be ok.

also it works if i just leave out that one optional argument of \pic (but i would really like to label the angle).

i hope you can help me out here:) 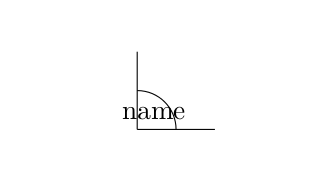 Not the answer you're looking for? Browse other questions tagged tikz-pgf tikz-angles or ask your own question.

182
Easy curves in TikZ
3
TikZ: using the angles library
14
TikZ: Drawing an arc from an intersection to an intersection
9
Line up nested tikz enviroments or how to get rid of them
0
LaTeX Tikz: Compare two \def arguments
8
How can I draw angled lines in LaTeX to create ruled template for calligraphy?
0
labeling points on the circle with the same symbol
2
Gap when using tikz angles