How can I draw the outline of a path in tikz?

Using the arrow tip library, I can draw thick arrows with triangular tips, like so:

These arrows are filled. I want just the outline of this arrow, but just using the "double" style doesn't do that. Both the start and end tip are filled:

I think I need to create the outline of the first arrow (which is totally filled), and then draw a line along this outline. I just have no clue how I could do that.

I ended up drawing each arrow twice, as first suggested by EEva, but refined in the way that Andrew suggested. I'm using a LaTeX length to store the width of the line "around" the arrow. This width is called \DblTriCapDelta and the tikz style that uses this length is called DblTriCap, as it produces a triangluar capped arrow with double stroke:

I have yet to define a key handler (never did that before). The current usage is:

I'd like to be able to choose the fill colour, but didn't quite get it to work.

If I understand correctly what you want to do then you will need to define new arrow shapes to get the outlines. The fact that these arrows are filled is hard-wired in to their definitions. Fortunately, that's not too difficult to do. The code for these arrows is in the file pgflibraryarrows.code.tex and is:

There we can see the final command is \pgfusepathqfill which fills the path just constructed. To get it drawn rather than filled, we change that to \pgfusepathqstroke. Of course, to avoid name clashes, we change the name of our arrow as well (and put this in the preamble rather than editing pgflibraryarrows.code.tex.

But even this doesn't work as you want since you presumably want only some of the edges drawn and although one edge is left off (since a fill implicitly closes the path) it isn't the right one. Moreover, the line width is inherited from the main path which definitely isn't right as you want it to be the width of the "left over" piece from the doubled stroke. So we have to mess around a bit with the order in which pieces of the arrow are drawn. Moreover, to be fully flexible we should ensure that the line width is set correctly (incidentally, your two declarations of line width are unnecessary; the second trumps the first).

Summing all that up, the following adapts the arrow heads to provide an outline. It's in a \makeatletter ... \makeatother chunk because I use a couple of temporary storage slots that have @s in their names.

Here's what I got (your original on the left and my variant on the right):

Here's the code (the arrows library is only needed for your example):

I've also looked for line caps that were just empty, but couldn't find anything in the manual.

However, here is a cheap (but working) solution:

I just drew the first example two times, one black, one white and moved the borders a bit.

Thanks to Andrew Stacey (in the comments), this can be shorter and nicer, using postaction:

I too needed a double stroked (or rather, "filled and stroked") thick arrow line; so here is a slight modification of the snippet in answer by @EEva that uses postaction - with controllable colors, width, and outline width; it produces something like this: 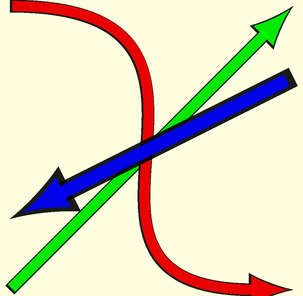 I left the transparency, so it can be seen how arrows are attached to ends. Code attempts to tune the shortens, but if you change the arrow type (and even if not), you'll probably have to finetune manually. The code is:

6
Tikz: convert an object to a filled path?

12
TikZ: Cropping the Bounding Box
21
Can I combine arrow tips in TikZ/pgf?
21
Rounded ends with tikz
20
How to define the default vertical distance between nodes?
2
Shorten line without moving arrowtip in PGF 3.0
9
Line up nested tikz enviroments or how to get rid of them
4
Can TikZ rounded corners make a bulging curvy triangle?
1
Tikz line doesn't start exactly from node coordinates
2
rounded corners of an arrow in tikz
3
Document header with tikz