I have been using TikZ a lot but only for 2D plots. I was hoping I could use the 3D package for plotting regions on the (x,y,z) plane given by linear inequalities (currently I'm using Mathematica for these 3D plots but I wanted to have more control over the plot options) but it seems that this is not the case.

Is there any alternative to TikZ-3D that is able to plot set of points (x,y,z) such that 0 is less or equal than min(x,0)+min(x,y,0)+z ? By that I mean: 1) Can it plot 3D level sets? and 2) If the function is a binary function: 1 in a set similar to the one described above and zero elsewhere, will it be able to do the level sets plot in minutes (say less than one hour)?

EDIT: "tikz-3dplot does not, in general, consider polygons, surfaces, or object opac- ity" so I'm changing the question to allow for gnuplot, PStricks or Asymptote (I'm not familiar with both of these packages) or any tool that allow me to control the plots specifications with greater detail.

I'm attaching a 3D plot I did with Mathematica: 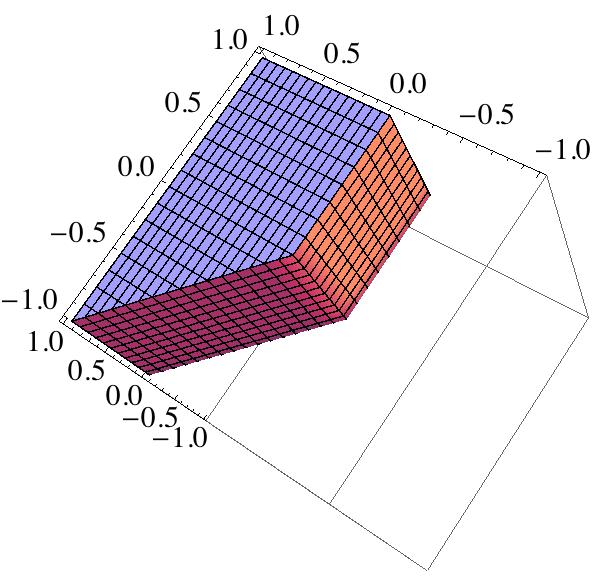 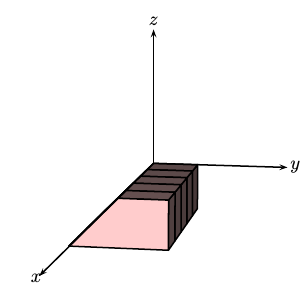 I recommend METAPOST to anybody interested in producing graphics to use in TeX or LaTeX documents. The reasons to prefer METAPOST over TIKZ or similar LaTeX packages are:

The TeX users group has a page on its website devoted to METAPOST. The list you will find there is pretty long, so let me add that I especially like the introduction written by André Heck, you will find an example of a 3D-plot on page 54. See also Phan's propaganda for METAPOST.

You also could be interested in the answers to A good METAPOST alternative for plotting 3d surfaces.

Not the answer you're looking for? Browse other questions tagged gnuplot asymptote pst-plot or ask your own question.

15
GnuplotTex: automatic plotting and vertical line indication
9
How to draw 3d vector field on a line?
2
Tikz picture + function plotting | what once worked, no longer does
4
Best program/package for creating LOTS of function graphs to use in Beamer?
1
Plotting Surface produce spikes in TIKZ but not in gnuplot, Gnuplot plotting problem
2
Plotting the graph of sin(1/x)
4
Plotting Financial Data with PGFPlots
2
Which TeX graphics package is this?