Building a 2D histogram with PGFPlots

What I want to achieve

The framework ROOT can create 2D histogram plots with colored boxes indicating count rate that looks something like: 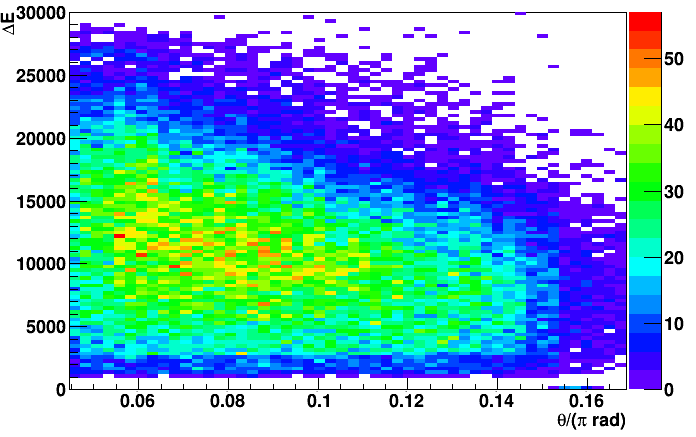 My question is really only: can I produce this kind of 2D histogram through PGFPlots? The rest of this post describes my current findings and attempts.

As of writing quite recently, ROOT got a TikZ output engine called TTeXDump, that in turn would generate: 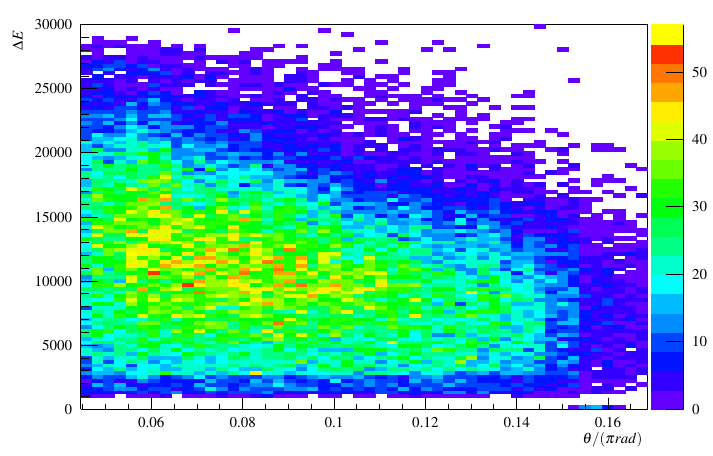 This is closing in on good graphical quality. The axis label texts are easily manually modified to TeX syntax (or it could be done in ROOT before the export), but there are other issues:

and probably other things.

I have made some attempts at generating the plot with PGFPlots from exported ROOT data. There are, however, several details that I do not get right, and perhaps there is a more obvious solution.

By dumping the histogram bin data in the form

in the file scatter.csv (Pastebin link of data), the following code gives the below result: 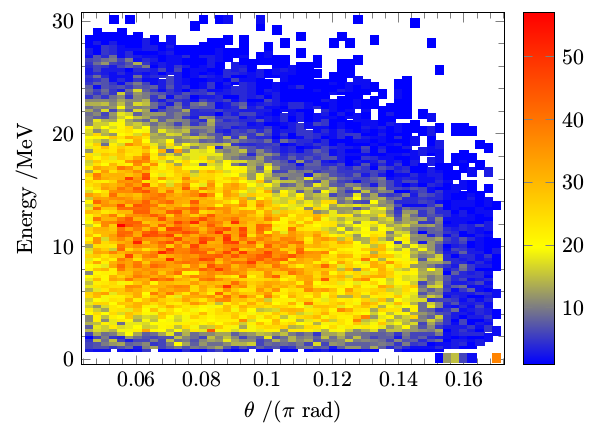 Fine-tuning of text, tick marks, colormap, etc., is easily done after this, but there are some issues with the data rendering:

Is the scatter plot approach taken above perhaps the wrong one? Some other thoughts have been:

That might seem like a lot of questions, but as mentioned initially, the kernel is really only a single one: can I produce this kind of 2D histogram through PGFPlots?

With the help of Christian Feuersänger's comments, I wrote a solution I am happy with, so I am answering the question myself.

The question Using pgfplots, how do I arrange my data matrix for a surface plot so that each cell in the matrix is plotted as a square? here on TeX.SE that Christian Feuersänger suggested in his first comment was very useful. Viewing the data as a matrix instead of a scatter plot made things easier.

First, I needed to get the input data in matrix form. Skip this section and go directly to "Working examples" below unless ROOT is of interest to you.

Before, I generated the scatter plot values via ROOT's Python bindings as:

The input argument hist is a TH2F object. See the ROOT and PyROOT documentation for more information.

The "+2" in xrange handles that ROOT saves an underflow and an overflow bin on top of the bins that are actually drawn. I at this stage explicitly threw out the points with no content to keep the "scatter plot" in PGFPlots clean.

But now I instead want to output a complete matrix, which I did as follows:

I now discard the underflow bin by starting the range from 1, and I also discard the overflow bin, since the last bin will not be shown when choosing shader=flat corner in PFDPlots later. I could have just given a dummy value instead of the actual overflow value, but it does not matter (EDIT: actually, it might matter if the overflow value is larger/smaller than the maximum/minimum "real" value — it would then affect the color map scale, so beware).

Instead of extracting the center of the bins, I now am interested in the lower bin edges.

I also change the order of the x and y loops to get the matrix data in a form that PGFPlots processes more efficiently, as described in section 7.2.1 in the manual: "Importing Mesh Data From Matlab To PGFPlots". This made a noticeable difference in compilation time.

Now that I have the matrix, a minimal working example of plotting this data (matrix.csv) as a 2D histogram was: 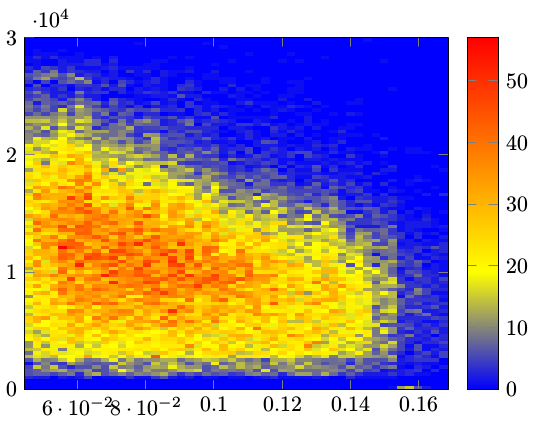 Section 7.2.1 in the manual and the earlier linked question explains the parameters. mesh/cols=51 comes from the known fact that the histogram contains 50 horizontal bins, and the extra one accounts for the "dummy bin" mentioned in the above linked TeX.SE question. The bin count could be output to a CSV specific configuration file along with the data if more automation is needed.

One issue was that the compiler (xelatex in this case) threw exactly 5000 rows to the terminal with content:

There should be 50⨯100 = 5000 "cells" to be rendered in total in the image. This excess of messages might be a bug in itself, or something that I could have suppressed in some way.

Another issue is that the "background", i.e. the parts of the graph that represents value zero, is colored in, which is not optimal. The most obvious solution to this I found was to create a color map that "began" at white, which makes sense for these types of graphs anyway.

Along with some minor other formatting fixes, this gave the following result: 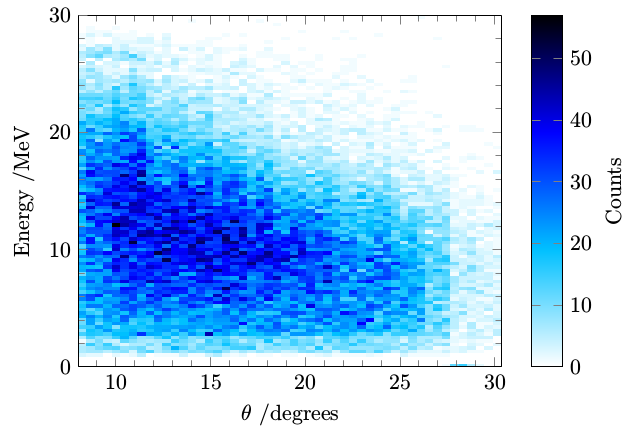 I will implement the x filter and y filter transformations in the analysis stage instead of the plotting stage.

Probably not a finished "product" yet, but now I can apply styling freely, and it is produced with a definitely manageable amount of code.

15
Force "axis on top" for plotmarks in pgfplots
12
Using pgfplots, how do I arrange my data matrix for a surface plot so that each cell in the matrix is plotted as a square?
1
2D histogram from a single row of a table, with discrete axis

8
pgfplots: Reduce number of ticks
7
Missing bars in pgfplots histograms
6
How can already binned data be plotted as a histogram?
6
Histogram with overlaying Gauss curve (pgfplots)
0
Modifying some features in a scatter plot (Version 3)
5
Rug plot in pgfplots?