All of them allow three forms of usage (I restrict for sake of simplicity to \section, it just stands short for any of the section level commands):

I have encountered (not only as a consequence of questions at TeX.SX) following problem that it is sometimes necessary to redefine the behaviour of section, adding some start code to be executed just before the section title is printed on the page and some code directly afterwards, or do some configuration otherwise, affecting future code.

Some of these tasks can be just done with hooks as provided by the etoolbox package or really rewrite at least the top code level of section via \@ifstar and \@ifnextchar[ etc.

I want to use another approach, by adding key values in the first optional argument to section without changing the complete syntax of \section, say (assuming some keys are already defined...)

This means a mixing of a non key part of the 1st argument and (lots of) key parts of the same argument.

This means, that the traditional short toc entry is grabbed as first part the rest is treated by the key value package commands, say xkeyval.

However, at least in the case of xkeyval, saying \setkeys{FamilyA}{#1} will fail, since it will find a 'key' named 'foo' which is not defined and stop with an error message.

Is a peaceful coexistence of key value and non key parts within an argument (regardless optional or not) possible?

Here is a non working example, where I use a dummy command instead of redefining \section.

The following provides a mixture of starred and optional argument for \section with the requirement to use toc=<ToC entry> for sections' ToC-level entry. 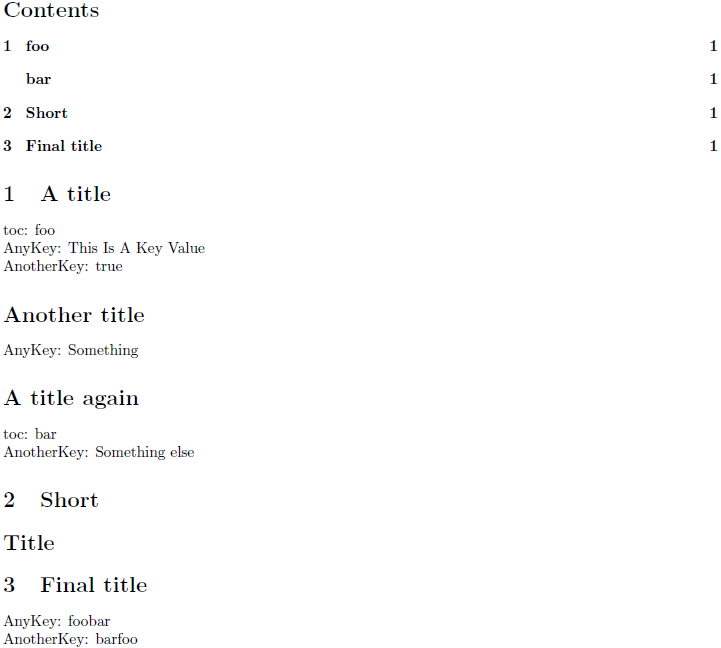 As mentioned in comments, the advantage of providing the ToC-entry using a key-value approach allows you to change the order of specification, if needed. However, if need be, the definition of the new \section could be updated to use an interface like (say)

Not really an answer but too long for a comment. The KOMA-class already have a syntax for keys in the option argument of sectioning commands. It is activated with one of headings=optiontoXXX. You can extend the keys (but you naturally will have to add keys for toc and head then too, to avoid side effects):

12
Which arguments of `\includegraphics` cannot be set beforehand?

6
Do I really have to initialize xkeyval’s key manually?
17
Global key-value dictionary
7
How to define a key=value that has an equivalent boolean value key
4
Using a macro evaluating to a set of xkeyval arguments as argument to another command
8
Need help to understand xkeyval example
7
Splitting a CSV list from a xkeyval key argument into parts
6
Setting a specific key (and value) depending on state of \if macro
2
How to make xkeyval accept a value containing both \par and a comma
5
Simple key-value example
1
Ampersand in expl3 keyvalue command