I'd like to create an environment for enumerating different cases. Something that would look like \itemize but instead of printing a "-" symbol at the begining of each item, prints (for the first item) "Case 1:" (eventually in a big font) and then line breaks , "Case 2:" and then line breaks for the second item, etc. Moreover I'd like not to have any margin after the break line, I'd like to have everything I write after "Case 1:" to begin at the same spot as the rest of my domcument.
I'd also like that the different cases can have "names", for example somthing like the \theorem environment where you can put the name of the author in brackets. Is there any command that already does what I want? Otherwise can somebody help me to create such environment?

Thanks a lot I managed to do something close to what I wanted but I still can't make Latex break line after "Case"... This is what I wrote:

But when I try to add in the setlist argument breakline or \\ I only get errors...
Also do you have any idea to add an argument to this new list so that it prints a title in backets and then break a line?

I fudged it with a \trlap from stackengine package. EDITED to add listparindent specifier. 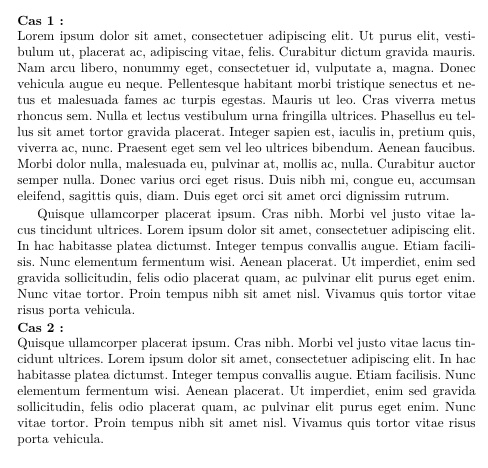 Not the answer you're looking for? Browse other questions tagged environments itemize or ask your own question.