Obtain a single TOC from using both listings and SASnRdisplay

I began using LaTeX just yesterday and I'm stuck on a frustrating problem. I need to automatically include a lot of source code into my document and getting it code-highlighted, row-numbered, labeled and indexed. I've done most of the job, except few points. First of all, I'm using different languages: PHP, JS, PostgreSQL, R and SAS. I've found that listings doesn't correctly treat /**/ SAS comments, so I decided to use the SASnRdisplay package which seems to be a sort of "extension" of the listings package. They share a lot of aspects. After a lot of tricking I finally got satisfied with the results.

I've tried using \setcounter{lstlisting}{3} but it doesn't seem to work.

Here's an example to test the \lstlistoflistings command (the other features are not implemented here for simplicity):

And here's the output: 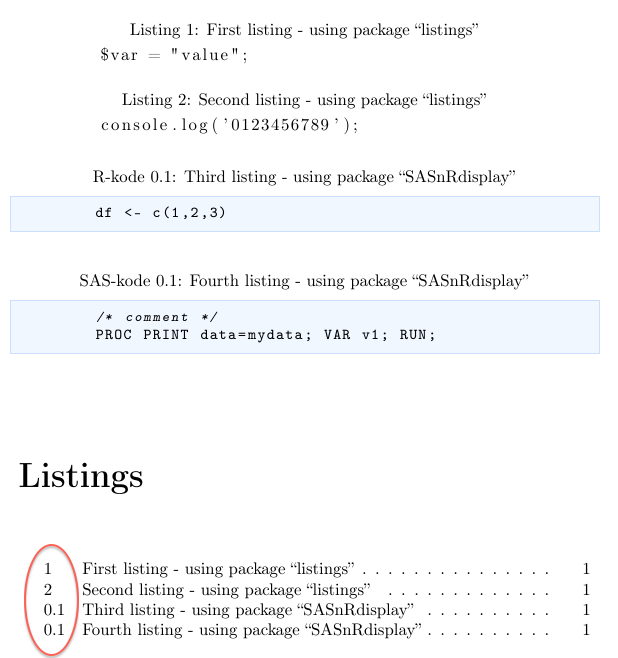 I had a look at the source code of the SASnRdisplay package. It defines a macro called \SNRletcountercounter that overrides the normal numbering scheme of listings carried out by the listings package:

Redefining \SNRletcountercounter to \@gobbletwo cancels the effects of that macro and yields the desired output. 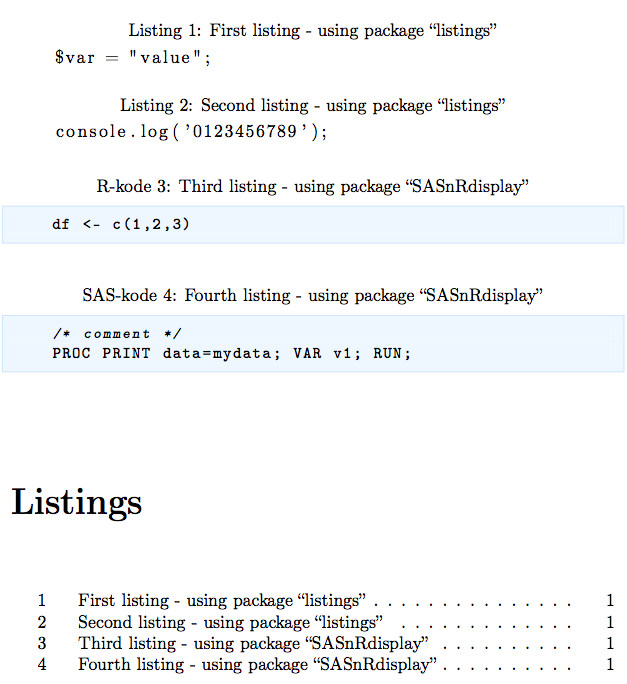 Jubobs solution (\let\SnRletcountercounter\relax) works but a string stating "lstlistingRcode" may appear before every listing generated by SASnRdisplay. The other way to go is to update the listings counter using the last counter value used. If the last listing was from the listings package and you want to add a listing from the SASnRdisplay package, then add the following line between the two listings: \setcounter{Rcode}{\value{lstlisting}} otherwise add the following one: \setcounter{lstlisting}{\value{Rcode}}

4
Sync listings caption numbers and add all to List of Listings
6
Fix page numbering format for latex listings package (lstlistoflistings)
7
`listings` and `sidecap` - Side captions for listings
4
Final linebreak in lstlisting, and linebreak in captions (with IEEEtran)
6
How can I avoid the use of default styles when no listings language is set?
2
Source code listing using \lstinputlisting - prevent other floats splitting it up
2
Do not comment parts of a listing, listings package
1
Listing has wrong numbering if used with separate caption