Below are two TikZ pictures. In the second one, I've added a \scalebox to scale the nodes ABC and the distance between them. I want the A to remain in the same position, but unfortunately the coordinates are scaled with respect to origin.

How can I rescale that part of the figure without translating it?

MWE for the picture with a scalebox:

To be clear: I do want the distances between A, B and C to scale, I just don't want the entire scalebox to move towards origin. In my actual document, the contents of the scalebox are more complicated.

Use a scope with options scale=0.67 and transform shape instead of the \scalebox. All numeric coordinates inside the scope will be scaled. But you can use an outside the scope defined named coordinate as "anchor" to position the node A. 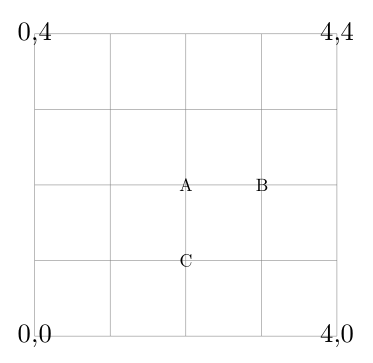 Not the answer you're looking for?Browse other questions tagged tikz-pgf positioning or ask your own question.

11
Rotate a node but not its content: the case of the ellipse decoration
5
Scale TikZ nodes and shapes for a given canvas size
11
How to define the default vertical distance between nodes?
12
Numerical conditional within tikz keys?
5
TikZ + scalebox: Vertical text spacing in node
7
Why do I get an extra white page before my TikZ picture?
13
TikZ: Drawing an arc from an intersection to an intersection
9
How to prevent rounded and duplicated tick labels in pgfplots with fixed precision?
12
Drawing rectilinear curves in Tikz, aka an Etch-a-Sketch drawing
9
Line up nested tikz enviroments or how to get rid of them