Implicit \hfil at the end of each paragraph?

Every paragraph has \parfillskip glue added to the end of the last line. Normally the value of \parfillskip is 0pt plus 1fil, which exactly balances \hfil. Therfore,

will have equal space before and after "Omega". On the other hand

has infinitely stronger stretch on the left side of "Omega" and so "Omega" is flush with the right edge.

If \hfil or \hfill is used in the middle of a paragraph, if there is no linebreak forced by the user, one will usually find that TeX fills up the line as full as it can without shrinking any spaces, and then simply stretches \hfil or \hfill only as much as needed to fill the line. In order to flush the "Omega" to the right edge, one can use either \hfil or \hfil with a line break right after "Omega":

If you break the line with \\ (a natural way to do that) one should use \hfill because \\ adds \hfil (usually).

If \centering, \flushleft or \raggedright is in effect, then there will be glue that is added at the end of every line. That glue is usually equivalent to \hfil, so one would then also need \hfill to ensure "Omega" is at the right.

In summary, to flush "Omega" to the right edge, use \hfill before it and put a linebreak (or the end of the paragraph) right after it. 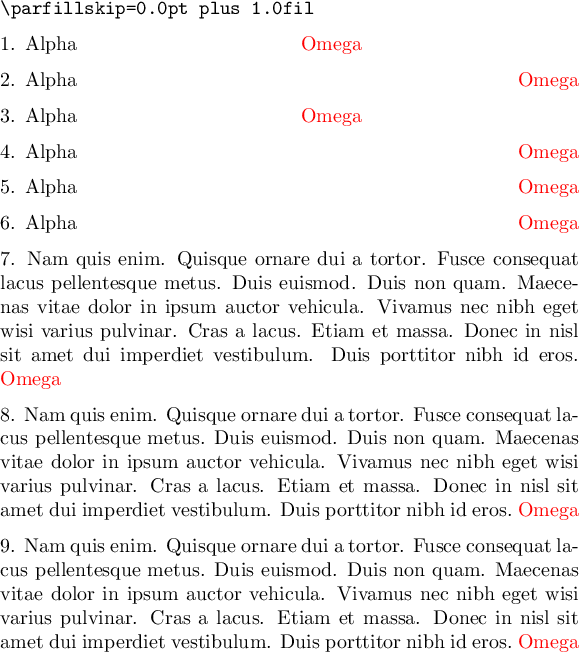 Also to be considered: Omega could be subject to hyphenation. This can be prevented by \mbox. Robuster variants to put Omega at the end of a paragraph:

Second case: Alpha \hfil\ Omega in the middle of a paragraph

If Omega should be at the end of a line, then the line should end right after Omega: 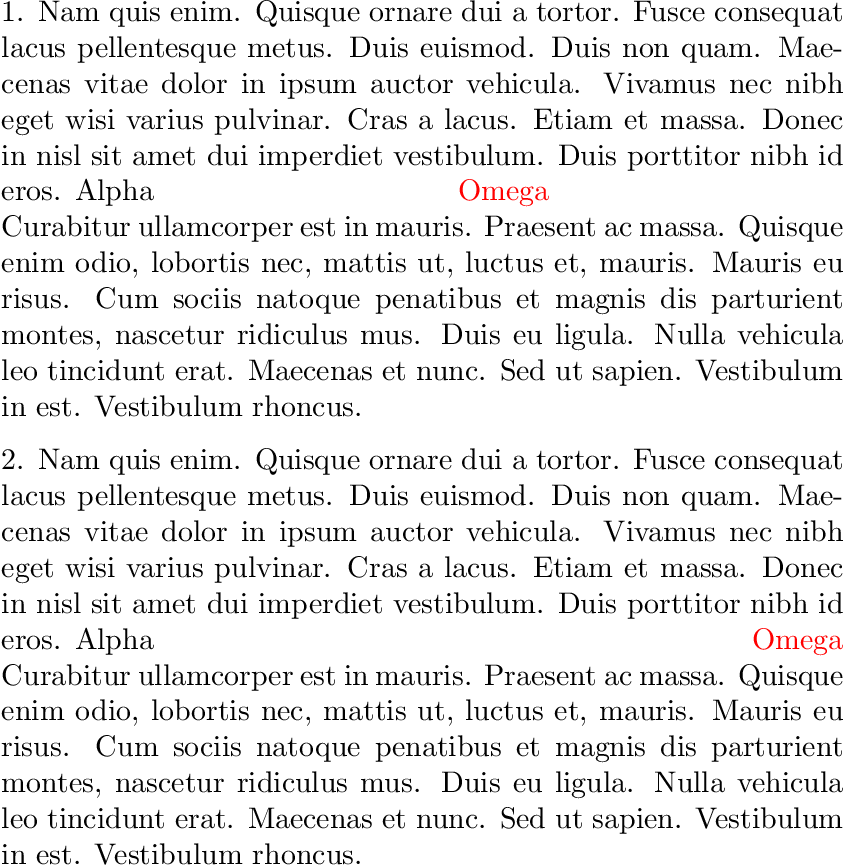 Not the answer you're looking for? Browse other questions tagged horizontal-alignment tex-core paragraphs plain-tex or ask your own question.

81
What is the difference between 'fil' and 'fill'?
3
How to align the new environment

4
Start new paragraph inside a table cell
15
Implicit newline at the end of each paragraph?
3
Changing paragraph begin/end commands
9
How does \halign differ from \hfil?
5
Centered-justified or right-justified
1
Writing paragraph no space at end of each line
8
What tokens are in the end of line?
4
Question about exercise 14.23 in TeXbook
2
Paragraph numbering (implicit)
2
How to flush right some text in a align* environment?