Can I mark unread references?

When taking notes in my research notebook, I often end up citing many papers because the paper I am writing a summary of has cited them: I want to record adequate justification of each claim, and I want to be able to track down the sources if I need to in the future.

However, it is not practical for me to stop and read every reference the current paper is citing. Therefore, some of my the references in my notebook I have read, and some I have not read. This bothers me, because they are not explicitly marked as such in the actual document.

How can I cite my Bibtex sources (I am actually using JabRef with biber under Miktex/Texstudio) in such a way that I can distinguish those I have read from those I haven't?

What logical levels I want

But if only binary discrimination is possible, the last two can be collapsed into a single group.

Ideally, I would like each class of reference be marked when it is referenced. For instance:

It has recently been discovered that water is wet[1] and the sky is blue[+2], but it is still controversial whether a pound of iron is heavier than a pound of cotton[-3].

Again, the exact symbols don't matter. Alternatively to this scheme, it would also be fine if it could output three separate bibliographies, with each class of reference in its own bibliography.

I would prefer to be able to tell at a glance which references I've read and which ones I haven't both in the text and the bibliography(ies), but if that is hard, then it would suffice if I could by looking at the bibliography only.

An alternative would be to split your bibliography into three sub-bibliographies, again thanks to biblatex. You filter them with keywords, and add a prefixnumber to every one of them.

The bonus point is that you just have to change the keyword to change its citation key.

The bad news is that your bibliography is necessarily slitted into three sub-bibliography.

The recent-developed Bibulous project makes this easy to implement. Taking the OP's example, we have a database file (readtag.bib) in which a readtag field is inserted into each entry:

Next we can develop a style file (readtag.bst) that makes use of the readtag field:

Finally, we can use the readtag.tex file

The \renewcommand{\@cite}... line here is used here to allow the citation labels in the text to be different than those in the reference list. Compiling readtag.tex and replacing BibTeX with Bibulous as the bibliography engine gives the resulting formatted reference list 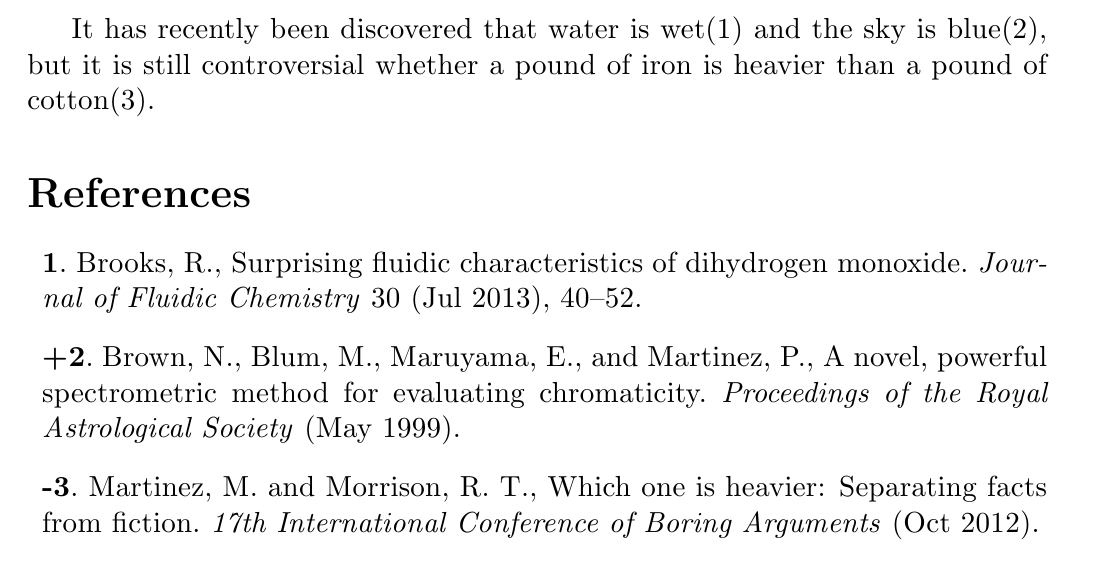 A first step toward a simpler solution, that uses biblatex, could be to use the shorthand field. From the biblatex manual:

field (literal) A special designation to be used by the citation style instead of the usual label. This field is intended for citation aliasing. If defined, it overrides the default la- bel. If any of the cited bibliography entries includes a shorthand field, biblatex automatically builds a list of shorthands which may be printed in addition to the regular bibliography; see § 3.5.3 for details. See also label.

The bad point is that it is not compatible with any citation style: you have to define by hand the key that will appear in your document!

Not the answer you're looking for? Browse other questions tagged bibliographies citing or ask your own question.