How come the tilde ~ sometimes does not behave like non-breaking space?

This is again one of the behaviors that are quite difficult to catch in a reconstructible (and simple) example, so one has to resort to animations.

Basically, the issue is this: the tilde (~) is supposed to be a non-breaking space character, right? How come, then, when I use the Fig.~\ref{fig:myfigure} in the MWE below, it sometimes ends up breaking the line exactly at that ~ character's location, as can be seen on the .gif below: 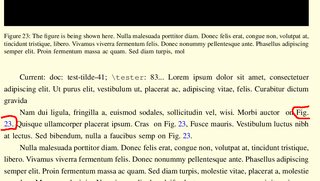 Isn't that what the tilde is supposed to prevent?

How can I find out why this is happening - and how can I get a non-breaking space in my Fig.~\ref{...} construct?

Below is the MWE, test-tilde.tex; it uses the package repeat-build.sty that I posted here (tested only on Linux currently) - and it needs to be built twice, with -shell-escape:

... so that all PDFs, used in the animaton above, are generated.

EDIT: I modified the code, so it will build without the repeat-build.sty; and it will reconstruct the situation on the still screenshot above (where the variable \tester=87); then if you want to use repeat-build, simply (un)comment the corresponding lines.

Here's the MWE that was missing from the question:

Uncommenting the \show~ tells us

ie, breakable space, and removing the \usepackage{ctex} line sets it back to the usual

If you must use ctex then it seems that you can replace ~ by \nbs or you can use \standardtilde to restore the usual behaviour of ~.

Just wanted to include some notes about my debugging procedure here.

Obviously, since the tilde is the problem, I first wanted to see what does it actually do. At first, I didn't even think it was a macro (I thought it was "just" a character with a "special catcode", I guess), and then I thought I'd try texdef in a console shell:

At this point, things get complicated because it's difficult to search online; the tilde is an ASCII char (and so it doesn't have a html entities representation, as confirmed by php -r 'echo htmlentities("a~a\n",ENT_COMPAT,"UTF-8");') - and so, I cannot really search for a query like \def ~ in neither online search, nor the local here at Tex.SE. Somehow though, I noticed this in online search results:

Ah, so at least a pointer; so one can now do this from the terminal shell:

Right, so what now? Well, first I'd thought I'd redefine tilde, so it prints out a message to stdout; so I thought, if it gets replaced by something, then the printing would stop, and point to the location where the redefinition occured. So I used this:

So far so good - except this macro may crash on tildes inside a caption and such. And even worse, the redefinition doesn't occur in the middle of the document, so this ultimately doesn't help much.

So, the only thing that remained, was to print out \meaning~ throughout the entire document (preamble included), and see where it changes. So I did the equivalent of this (as in the test-tilde.tex above):

Then could to this:

Hah! So the tilde ~ first changes when babel is loaded - and then, a second time, right after \begin{document}!

Of course, I couldn't see any logic behind this -- and as a last resort, I tried to look up the last of those meanings (the one in force during the document compilation) on the Internet; luckily, among the first results was:

\CJKtilde This command changes the definition of the active `~' character from an unbreakable space to \def~{\hspace{0.25em plus 0.125em minus 0.08em}}

Ah well, that finally confirmed what the problem is (and the solution is as on the accepted answer).

Somewhat sadly, however - after all of this, I cannot say that this is a debugging procedure I could have done only on a local machine, without lookups online... wish my procedure was more robust than this :)

Well, hope this helps someone,
Cheers!

Not the answer you're looking for? Browse other questions tagged line-breaking debugging tilde or ask your own question.

39
Is there an equivalent of lipsum for shorter sections of text?
24
Difference between control space and non-breaking space
16
Command \nobreakspace unavailable when switching to T1 encoding under XeLaTeX
10
Language problems with biblatex and babel
19
Get current source line number
10
Expanding (edef) a lipsum command?
3
Possible to run a handler / callback function, when a macro (\inputlineno) changes value/definition?
3
Package to run multiple iterations of a variable, with compilation?