This question is about the semantics of glues like 0pt plus -1fill, where the coefficient in front of the fill is negative. The following minimal example shows my attempt to figure this out empirically: 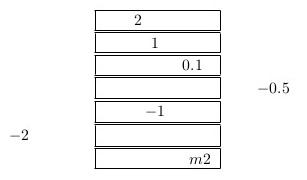 Comparing the -2 and m2 lines, we see that plus -2fill really is different from minus 2fill. The -0.5 line makes sense to me. I said I wanted the ratio of the two spaces to be -0.5, and it looks like tex made it so. The space on the left-hand side is positive, while the space on the right-hand side is negative and about half as big.

What I don't understand is the results for -1 and -2. They don't seem to extrapolate logically from the preceding examples. Is this just some kind of artifact of the internal implementation of the data structure, like an integer overflow or something?

After playing with this some more, I think I understand it at least a little better. This code produces the following output.

This makes sense because it's trying to place an amount of whitespace L on the left and R on the right such that L+R=w and R/L=x, where w=20 pt and x is the number such as -0.5 in the above code. The solution of these equations is L=w/(1+x), which is what we see graphed. What is still a little odd to me is how it handles x=-1, for which there is no solution.

Let's examine the examples from the fourth on, as the first three pose no problem. I'll denote by t the natural width of the text and by w the requested width.

Similarly for the sixth example, but the negative glue will be wider than the positive glue, so the text will stick on the left of the frame.

Here we have a different situation. In the linked question I described the \advance operation on glue registers. When TeX is building a box, it sums the available glues using the operation in Z7 and then applies the function γ. Thus the two fill infinities cancel each other and the normal glue added in a \framebox[80pt]{...} resurrects, so you get the same result as with \framebox[80pt]{$-1$}.

When you say \makebox[80pt]{<text>} (the frame is irrelevant), LaTeX basically translates this into \hbox to 80pt{\hfil<text>\hfil}. If the stretch component of the glue in <text> cancel out, as is the case here, the two \hfil commands will act, because there's no higher order infinite glue that supersedes them. You'd get an Underfull \hbox message with

because the [s] option will make LaTeX not to insert \hfil at either end.

Since the glue must stretch, the minus component is disregarded. So the result is the same as if you did \framebox[80pt]{\hfill m2} (as \hfill is equivalent to \hskip0pt plus 1fill).

27
Mathematical description of TeX's infinite numbers?
1
What does a negative length with “minus” *negative constant* mean?

15
Difference between one glue and two glues after each other
40
What are the exact semantics of \detokenize?
13
Practical uses for skips with negative stretch or shrink components
111
Large negative spaces
11
Negative phantom
6
Libertine fonts: spaces in PDF files
4
XeTeX: special \XeTeXcharclass needed for null glues
1
negative character space (negative version of `\ `)