This is a followup question to Expandable nested boxes with TikZ.

When using the \tikz command inside the tikzpicture environment, the positioning of the contents is altered.

Here are the two examples: 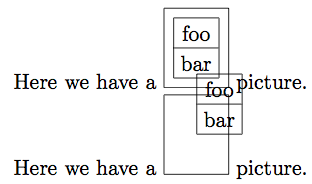 And the code responsible:

The lower left corner of the node in the second example is just right in the middle of the picture, so there must be a very good reason it is there. :-) Which one?

You can't use \tikz inside a tikzpicture environment like this. I have no idea what you are trying to do or what makes you think you can do this.

So you second picture is basically:

Still wondering why this doesn't get you good results?

The only surprise here is that both doesn't raise an error message! (This should be sent as bug report to the developers.)

You can't safely use arbitrary normal typesetting commands inside a tikzpicture. It's whole content is placed into a dummy TeX box which is later discarded while the drawing commands add their material into a second box which is typeset afterwards. Try adding some text without anything else into the picture. TikZ will just ignore it. You can however safely use \tikz or tikzpicture inside the content of a node. TikZ takes care to interrupt the current picture while processing the node content.

I could now speculate why you get exactly the output you get, but this would matter much. Apparently the size/bounding box survives but the placement is of.

If you want to be able to use drawing code inside and outside a node you can see if you are currently inside a tikzpicture by testing of e.g. \path has its normal TikZ definition. Note that TikZ reverts its own commands to the previous definition when typesetting the contents of nodes.

I find this question before asking this one

I realize with the pgfornament package that it's possible but we need to be careful. Till Tantau thought about this with \tikzifinpicture (see the question how to check ... Ok it's perhaps a wrong idea but it works despite the Tantau'comment

Now the problem is simple : You are inside a tikz's picture and you create a new picture (tikz or not tikz). This picture is placed at the current point, here the center of the rectangle, and by default the picture is placed with the south west anchor like in this case :

In your case you need to do the same thing :

Not the answer you're looking for? Browse other questions tagged tikz-pgf positioning nodes or ask your own question.

15
Problem with overlay when a tikzpicture is inside another tikzpicture
10
Expandable Nested Boxes with TikZ
21
What are most important variables set at the beginning of a tikzpicture? of a scope?
13
How can I check if the current code is inside a tikzpicture?
10
Matrix in TikZ and Equation
4
Alignment of node “groups” in TikZ using `\matrix` or other constructs?

4
Different backgrounds for title and “normal” frames in beamer
3
How could I center the text in a rectangle split node?
14
How to define the default vertical distance between nodes?
15
Numerical conditional within tikz keys?
7
Why do I get an extra white page before my TikZ picture?
12
Drawing rectilinear curves in Tikz, aka an Etch-a-Sketch drawing
9
Line up nested tikz enviroments or how to get rid of them
0
LaTeX Tikz: Compare two \def arguments
1
Arrow between BTrees