Within a document in ngerman or english, I'd like to have some Greek text using babel's polutonikogreek. It seems there are two options for including greek text:

which seems good for single words and short passages, and for longer passages

This problem doesn't appear when using 10pt, in this case, a Type 1 font is used.

How do I get Type 1 fonts for polutonikogreek in 12Pt (and other sizes)? Here's my setup / a MWE:

Interestingly, this issue appears even in a manual for the greek option in babel, so it doesn't seem to be trivial. Then again, the manual is from 1997.

P.S.: You'll notice there's also an issue with the circumflex accent, but I thought I'd post this as a separate question once this one's solved.

The cheep method to solve this is to tell (pdf)latex to use grmn1000.pfb for all sizes:

You will need more \DeclareFontShape command for bold etc. Look in lgrlmr.fd for a list.

The other possibility is to install the full set of the cbfonts. As far as I know there is no miktex package so you will have to do it manually. Get cbfonts.zip from CTAN (~70MB!), unzip it somewhere outside the miktex folders. You will get a folder

Then add the root folder cbfonts as a new root in miktex settings as in admin mode (for all users) or user mode (only for you). Call on the command line initexmf --admin --edit-config-file updmap (admin mode) or initexmf --edit-config-file updmap (user mode) which will open a updmap.cfg. Add Map cbgreek-full.map, save it. Then run updmap --admin or updmap. After this your example should use grmn1200.pfb for the 12pt greek. 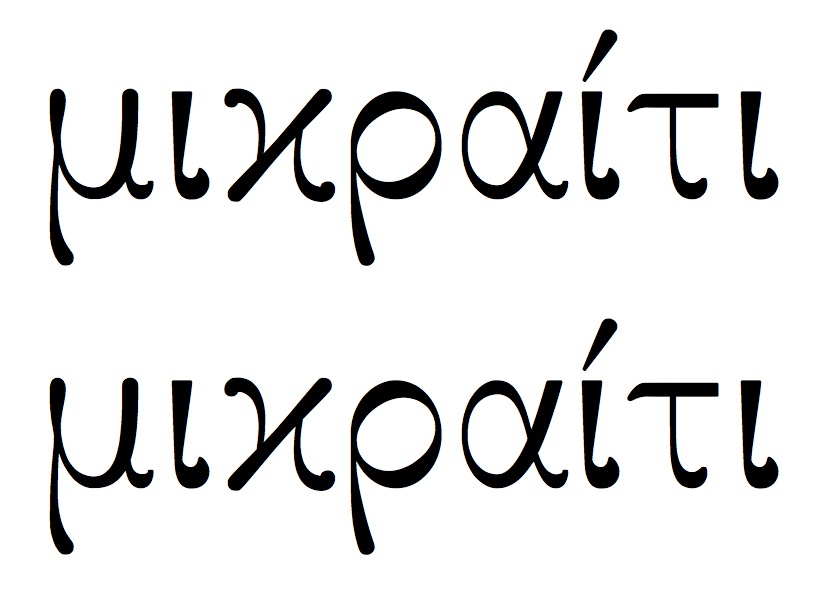 It seems that some fonts are not installed properly. It is not very easy to examine the problem, and I don't use MiKTeX (but TeX Live).

Anyway, search your MiKTeX directory for these files.

These should exist, since you compiled the document without errors:

And this may be absent:

If the .pfb file does not exist or at a wrong position, you should reinstall cbfonts package using MiKTeX's Package Manager, or install it manally.

If the file is OK, this may be wrong:

You may need to edit the updmap.cfg and run updmap utility to make the fonts valid.

From your comment and packages in CTAN/systems/win32/miktex/, it seems that MiKTeX has no full latest cb fonts for greek, but only the fonts for 10pt.

You'd better write a letter to MiKTeX mailing list to report the problem and ask for update.

And if you want to use the fonts now, you must install the full fonts manually from CTAN. It isn't easy for newbies, indeed.

You can get all fonts at:
http://www.ctan.org/tex-archive/fonts/greek/cbfonts-all

Not the answer you're looking for? Browse other questions tagged fonts babel greek latin-modern or ask your own question.

140
Error in TeX Live – Font ... not loadable: Metric (TFM) file not found
7
How can I prevent LGR encoding from switching font size?
6
Oldstylenums with Latin Modern (MiKTeX 2.9)
2
Setting font size in Greek text with TexnicCenter and Miktex
0
Is it possible to manually alias the bbm blackboard fonts?