Problem with babel and fontspec

I've just had a problem on using babel with lualatex (or xelatex as well) and fontspec in the context of latin and cyrillic alphabets. Here is a minimal example:

And here's the resulting .pdf:

As one can see, the font used for the English part of the text is Computer Modern, not Heuristica, and there's not even italic where it's supposed to be italic.

However, if I change the order of the languages ([russian, english], everything is fine:

If I compile with pdflatex, modifying accordingly the preamble and using the type 1 versions of the fonts instead of the opentype, everything is fine whatever the order of the languages. I tried with some other fonts, same problem. Is this a bug or do I miss something?

egreg's answer now explains why this works which I didn't understand when I posted it as a comment.

If you load fontspec after babel, then it all works: 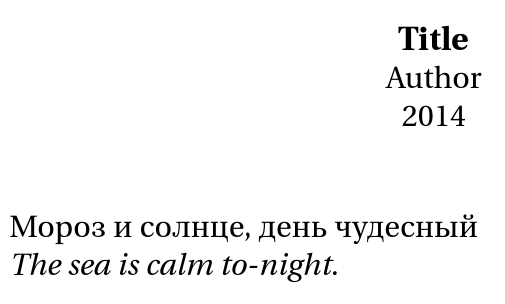 But note that the fontspec manual describes babel as 'not really supported' and recommends polyglossia (page 4). I assume they mean for languages supported by the latter which is not all of them but does include Russian.

The relevant part from babel.def is

Let's see what happens: at the end of the loading of babel, the instruction

is performed; since fontspec recognizes being called by XeLaTeX, it sets \cf@encoding to EU1. This might be needed from packages loaded later on.

Indeed, you get warnings from LaTeX such as

that is issued when \English is done, because babel executes \edef\encodingdefault{\latinencoding}, in order to be able to use Latin characters.

This doesn't happen if, more correctly, fontspec is loaded after babel, because fontspec (actually fontspec-xetex.sty) does

and \g_fontspec_encoding_tl is EU1, so the faulty redefinition of \latinencoding to OT1 is overridden.

Not the answer you're looking for? Browse other questions tagged fontspec babel or ask your own question.

1
Babel before or after fontspec?