I need a whole bunch of images and someone advised me to use Tikz and it seems like it can probably do exactly what I want, however I haven't been able to find some things and I feel like I've been hacking code together in a poor way. I made an example of what I want in paint: What I have so far is:

I feel like using the label to draw the inner circle is the wrong way to do it and I don't know how to get the text there and make the other kinds of arrows that I need. Can someone point me in the right direction?

You're on the right track; however, some improvements can be made to your code; most importantly, nesting tikzpictures is not always the best choice; in fact, in the case at hand, it's not necessary at all. 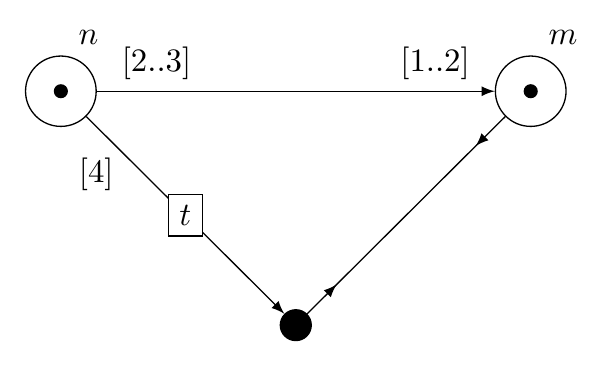 Here I will give some comments about the issued mentioned explicitly in the question.

19
How to define the default vertical distance between nodes?
16
Numerical conditional within tikz keys?
17
TikZ: Drawing an arc from an intersection to an intersection
12
Drawing rectilinear curves in Tikz, aka an Etch-a-Sketch drawing
9
Line up nested tikz enviroments or how to get rid of them
1
How can I have TikZ automata accepting nodes be the same size as nonaccepting nodes?
1
How do I change the radius of circle in a node in tikz style?
2
Document header with tikz