I'm using my own macro to enqoute some parts of my text. When using the itemize or enumerate environments at the end of my quote, the double quote charaters end up in a new line, whereas I'd like to have them at the end of the last item of the list. The same happens if I just put quotation marks around the environment directly. I tried using the inline option of enumitem in conjunction with the starred versions of the environments, however, I'll lose the correct indentation of long entries and the line breaks.

This is what I get:

"This is my enumeration:

This is what I want:

"This is my enumeration:

I do not think that you will have such quotes that often, so I think redefining the enumerate environment does not make sense. The problem here, as you have most certainly noted, is that you have to put quotes on two levels. One in front of your text and one after the item inside the enumerate.

For this rare case, I would just obey your predefined command and set the \grqq manually.

I deleted your defined command, as the great package csquotes is doing that job for you very well. I would definitely recommend to read its documentation and to use it from now on. I inserted some nice auto-quotes for you.

The last question could be: Why is that kind of quoting not supported. Well, in my eyes it looks really bad. It is difficult to understand the quotation, when done over several levels. If possible, I would write one more sentence after the enumeration and close the quotation after that. But as I have to assume, that you are not freely able to quote as long as you want, I am demonstrating the \blockquote in my MWE. I think, this is the much better choice. Long quotations should get indented and not surrounded by quote marks. That is much easier to understand. The last example shows a block quote with the direct mentioning of its author. 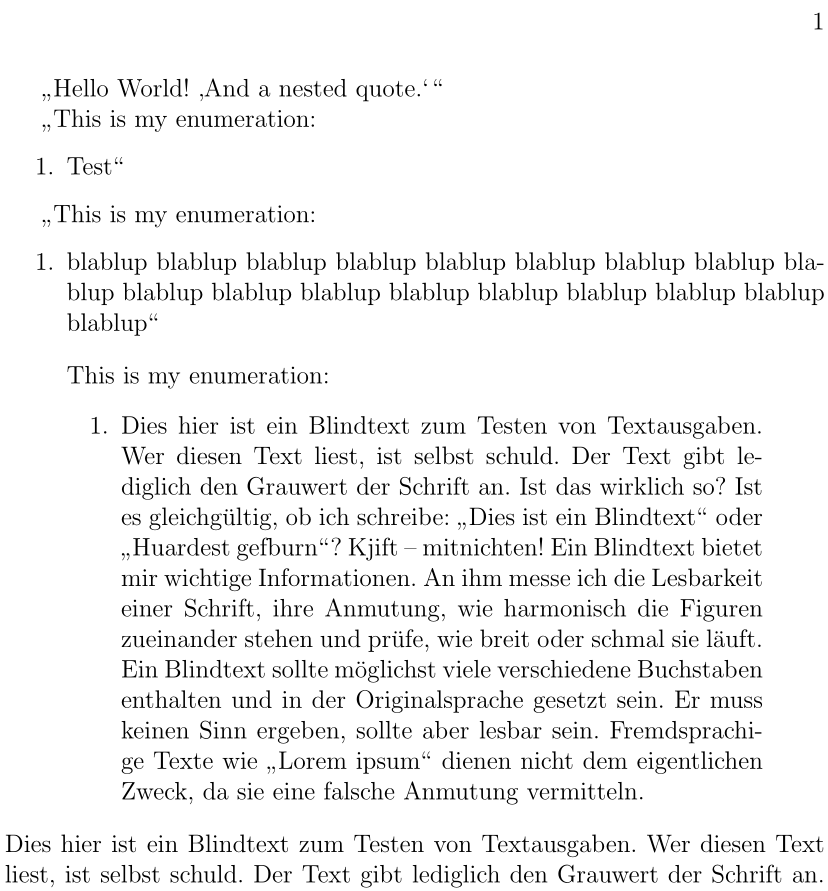 Not the answer you're looking for? Browse other questions tagged lists paragraphs enumitem or ask your own question.

3
Enumerate and itemize undefined + captions not working
3
The label of an enumerate list on its own line using enumitem
3
Empty line in tabular after enumerate/itemize
2
Why does enumitem not start on a new line after a labelled item?
0
Outlines package enumerate new list error
0
How to create a enumerate list adding a custom prefix before each item number?
1
Use the enumitem package to align enumerate labels with the paragraph indent
0
Creating Lists with Unique Identifiers