I'm trying to understand how the coordinate system work for drawing pictures with tikz. I'm a little lost...

Here is a MWE that shows of some example code: 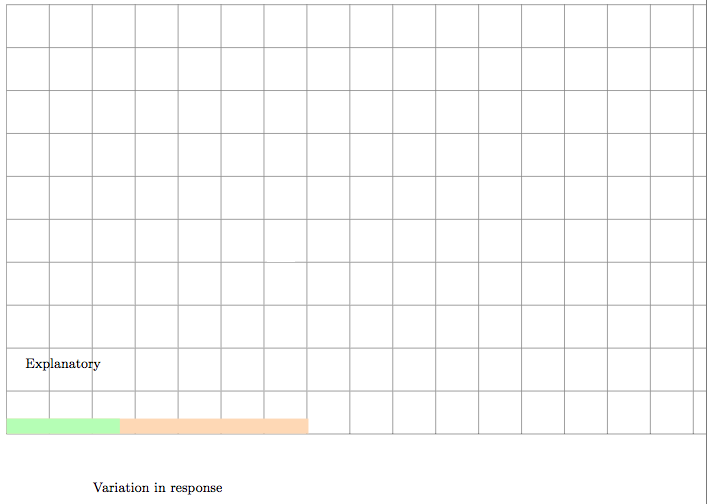 This is what was expecting, and wanting:

That third point is where it breaks down for me. Can someone please explain? I'll try to explain my confusion further.

In the second rectangle, I assumed that the rectangle was starting at (0,0) and ending at (75, 10) because of the width and height I provide. But when I place the third rectangle at to start at (75, 0), it starts somewhere else; why is it somewhere different?

Probably an easy explanation, but I don't see it.

[I am trying to draw a rectangle, and then cut it into sub-rectangles. This is a MWE, so it is more involved than this, with things changing slide-by-slide in beamer. But that's the context.]

By default, tikz uses centimeters (cm) as unit. You are using dimensions of the order of 200 (meaning 200cm) resulting in your image going beyond page and part of the image is not seen. Try setting [x=1mm,y=1mm], specifying all dimensions in mm and changing (unrelated) all tikzstyles (deprecated) to tikzset brings the image within the page.

The dashed lines are 5mm apart from 0 to 125mm and the solid ones are 10mm apart. Hope this is helpful.

19
How to define the default vertical distance between nodes?
9
Line up nested tikz enviroments or how to get rid of them
8
tikz and \pgfdeclareshape why the text is not at the center anchor?
0
Creating a coordinate system with TikZ
2
TikZ relative coordinate system
1
Node-local coordinate system
0
TikZ - vary node positioning depending on shape size / anchors
2
Document header with tikz
0
On using circular nodes on the path using`` \draw ... to node ..." without crossing the circles