How do I change the encoding of my files?

Back in the old days, before I left the hallowed shores of my native country, I didn't much care what encoding my files were in. ASCII was enough for my great-great grandfather so it was enough for me. Now I live in the land of my great-great-...-great grandfathers who have a slightly mangled alphabet and ASCII no longer suffices. That would be fine if it were just me: I've learned to love UTF-8 and have even embraced xelatex. But sometimes I get sent documents in weird encodings, and sometimes I want to resurrect some old document, maybe to include a section in a new document, so from time to time I find myself wanting to change the encoding of a document.

So: how do I do that? (Included subquestion: how do I determine the encoding of a file?)

Regarding Emacs: Sometimes I stumble upon a *tex-file encoded with latin-1 or latin-9, but the second line usually is \usepackage[latin1]{inputenc}. In Emacs, I delete this line and add via C-c C-m a new \usepackage, wait until Emacs finished looking which packages are installed and type inputenc. Emacs then suggests latin-1, I type utf-8 and Emacs asks, whether the whole buffer should be encoded with utf-8. YES! And Emacs recodes my file.

EDIT: According to comments, it seems useful to add: this is an AUCTeX feature. AUCTeX is a powerful Emacs package which adds much comfort when writing *.tex files.

Otherwise look for the manpage of recode.

I recently have had some issues with the encodings of different files (*.bbl and *.tex for instance), resulting in missing glyphs or funny combinations in place of accented letters.

A solution that worked for me, in Linux (Ubuntu 10.04 distribution), was using the iconv program:

Notepad++ is a very nice editor for Windows, it shows the current encoding and can convert the encoding to a different one. I use UTF-8 without BOM and the files worked well in all other editors afterwards. 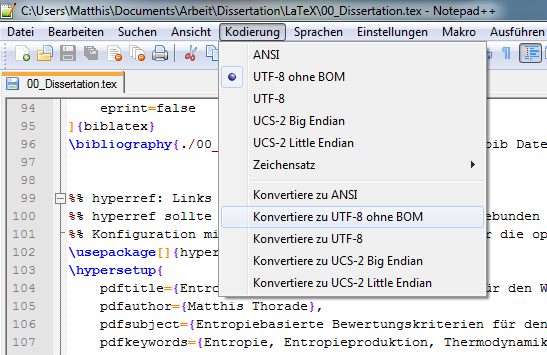 Changing the encoding of a file in emacs is easy, at least in GNU emacs at or beyond version 23, I think. First, visit the file in an emacs buffer. If emacs does not automatically visit the file with its current encoding, close the buffer, then type C-x C-m c to specify the file's current coding system, then open the file (using C-x C-f for example). Second, change the encoding by typing C-x C-m f to specify the new coding system. When you save the file, the new coding system is used.

The second issue is how to ensure emacs picks the right coding system next time you visit the file. For LaTeX files, it is usually not a problem, since latex mode looks at the \usepackage[…]{inputenc} to figure it out. There is a more general mechanism, but discussing that is outside the scope of this site, I think.

For single-file changes, I stick with my editor-of-choice (TeXworks), which can load and save a variety of encodings. The standard setting is UTF-8, but it will work with lots of others. (Auto-detection is based purely on the file itself, with no checking for inputenc or similar, so it may be that Emacs is a better choice in some cases.)

iconv is also available for Mac OSX (besides Linux) although I don't know if it came with the OS or if I installed it with the huge MacTex-Works package.

I had to figure out to which encoding I accidentally saved my file. So I had to try out different encoding conversions.

In the terminal, this listed all the encodings available

This way I tried out one possible conversion after the other until my special characters (ü, ß, ...) were displayed correctly in the terminal

This converted from UTF-8-MAC to UTF-8:

There was also a GUI program called Charco that was available for Mac OS X, GNU/Linux and Windows:

I can see that no-one mentioned the konwert utility (it is certainly present in ubuntu repositories). It has a lot of "filters" (for different encodings), can recognize some of them, nad has a lot of nice options, like removing trailing spaces, recoding cr/lf/crlf standards, escaping # $ % & \ ^ _ { | } ~ to TeX, rot13-ing the file and even more.

Not the answer you're looking for? Browse other questions tagged input-encodings or ask your own question.