It produces two slides: the first with the centered text and the second with the same text in the northern part of the frame.

I'd like to know if there is some technique to obtain a "moving text" effect: an animation that graciously moves the text north until it reaches the second slide position.

edit: I just discovered the animate package that seems to be able to do what I want. But the examples in the manual involve very complicated figures while I need to move just tikz nodes (with text inside mostly). Is there anybody who'd like to show me how to animate my code?

disclaimer: I know animation are considered bad practice but this is a very special use case.

Similar to Herbert answer but with TikZ:

you can compile with pdflatex but of course you still need acrobat reader to properly see the animation.

An animation with package animate. Run it with xelatex or latex->dvips->ps2pdf: 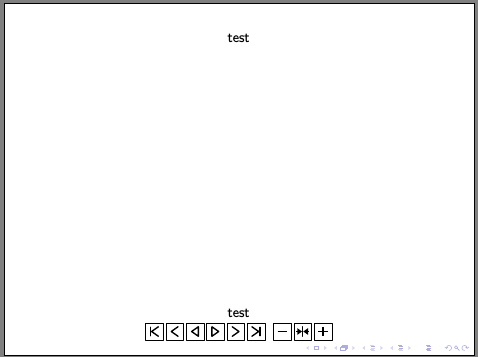 The PDF is here. View it with the Adobe Reader in fullscreen mode.

Not the answer you're looking for? Browse other questions tagged beamer animate transition or ask your own question.