color environment text is not converted in htlatex

I have using pdflatex to get the color environment text. But when using htlatex the color and the environment content (Note) is not converting. Please find the MWE below:

How to get the color environment and colored framebox environement in htlatex?

Colors are supported by tex4ht but there are two points:

The \Verb!\color{red}! instruction might be problematic since it does not on its own determine the extent of the text to be colored. As a result, its effect can cross logical boundaries. That is against the philosophy of markup languages in general and of XML in particular.

It is possible to implement the \Verb!\color{...}! feature but I'm not sure it is desirable to do so. I think it is preferable to expect users to use commands of the form \Verb!\textcolor{red}{...}! for code fragments.

so it is better to use \textcolor

each color has to be declared for tex4ht with command in the form:

Now back to your code. I think that:

is wrong, you are calling \label command with = as argument. It should be:

but this doesn't work with tex4ht for some reason. But there is also no reason to use \item this way, you may just define notelist environment this way:

We defined notecolor to be used here, because I think it is better to use logical names, it will enable you to change the color easily in the future. Now you need to create a custom config file and put these declarations:

commands from xcolor package are used here to convert named color to rgb value. note that when you use cmyk colors, the resulting color may be slightly different due to the conversion.

Now compile the file with 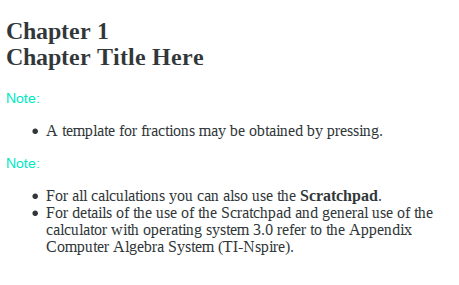 Not the answer you're looking for? Browse other questions tagged tex4ht htlatex or ask your own question.