LaTeX3: If next in input stream is command X or environment X, do Y else Z

Because I write my own document class (okay, I try to ...), this question bothers me for weeks as there are many situation, in which I need something like this.

Is there a way to test, if the next token list in the input stream is command \foo? I didn't found anything like this (or I didn't recognize it), neither in the web nor in the expl3 documentation. For example, I want to realize something like this:

So when I write

the false code is executed, and when I write

the true code is executed.

I know there are LaTeX3 functions like \peek_after:Nw, \peek_charcode:NTF and TeX macros like \@ifnextchar, but I don't understand how to use them in this case. I think it would be the best to use LaTeX3 functionality for this. And maybe, I am completely wrong and this is not the correct attempt to solve things in LaTeX.

In addition: Is there a similar way to test, if there follows an environment foo in the input stream?

This is an simplified example where I could use this: I have a command \exercise, which typesets something like an headline with a following vertical space. If "normal" text follows after \exercise, this looks like it should. But if I add an enumeration after \exercise, the vertical space looks too small---although it is the same. I don't know why, but maybe because of the space between the items (it's all about perception and a optical correction). That's why I want to add a very small additional space after the heading in \exercise, if it's followed by an enumeration. So what I want to realize is something like "conditional spacing". Here's an example:

Here's the result. In my opinion, the space after the second "Exercise" is a little bit too small. So I want to add some space after \exercise, if it is followed by an enumeration. 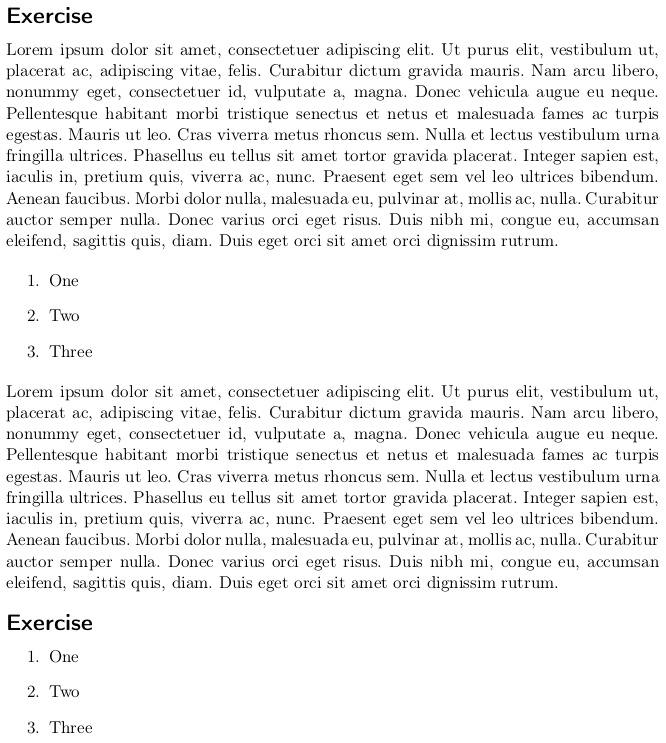 The answer ended up being just \addvspace rather than \vspace.

Better would bee \peek_meaning:NTF \emph { True } { False } which compares the next token after { False } with \emph, giving true in case it's \emph.

There is a TeX primitive which exactly does what you want, it is called \futurelet. Let me quote the TeXbook:

This primitive does not quite do exactly what you want, to begin with it has no clue what LaTeX is, let alone environments. Nevertheless this primitive implements the basic look-ahead mechanism you need to implement a predicate testing if some environment is coming next in the input stream.

TeX (the program, not plain TeX nor LaTeX) is a typesetting language with a powerful macro system and LaTeX is a markup language built atop TeX the program. We may say that \futurelet does not really belongs to the language defined by LaTeX, it is still here because it was whether removed nor hidden, but this is not something that you are expected to use. If you do so, you are explicitly voiding the warranty of LaTeX, so to say.

Difficulties bound to look ahead mechanisms

If you want to try \futurelet, you need to write your macros with great care otherwise they will be very brittle. Also, you want to be sure to review the following topics:

Note: Actually, \ifx compares the replacement text of two macros, but its most important use case is to compare two macros which are \edef-d versions of token registers.

If you are interested by learning to use \futurelet you can take up the three following challenges:

If you take 3 up, you can compare it with the getoptk package found in tex/plain/contrib/getoptk. Besides the guide to the macros I wrote an article in TuGboat describing their implementation.

Not the answer you're looking for? Browse other questions tagged conditionals programming expl3 latex3 or ask your own question.

4
How to test whether next token on input stream is catcode 10
26
How do I get a value out of a group?
3
How do I create an expandable conditional with a loop inside?
12
How do I remove the next token from the stream in LaTeX3?
7
how to space after LaTeX3 commands
2
How to test whether a token variable exists?
1
What `\cs_new_protected` and `\cs_generate_variant` do?
2
LaTeX3 - Read Json as Input in LaTeX3
0
How to capitalize LaTeX3 sequence element in document input stream?
1
Select among different color shades before document beginning