I would like to indent the first paragraph after a new section, but I don't want indent new lines.... I know indentfirst and parskip packages but they don't work together! I would like to combine the features of both, but parskip overrides indentfirst....

Thank you in advance!

Here it is a code example:

Of course, there are other types of paragraphs but are not so popular and understand the differences between the above two is enough. None is better than another, but the truth is that no matter what you have to decide to use, you need to be consistent about it and never mix them.

Normally in LaTeX text is composed in classic paragraphs, unless the preamble otherwise specified.

Now regarding indents, they are a visual marker to show where one paragraph ends and another begins. However, it is redundant in opening paragraphs and sometimes after some floating objects if the blank behind them is enough to give the reader understand that it is a new paragraph and not a continuation of the previous one. As in the case you are asking for.

The rule is simple: never indent a paragraph just after a head, whatever it is.

Because it is redundant and unnecessary. The header itself tells you that then starts a new paragraph, hence the bleeding is superfluous.

Sometimes I remove indents in other locations, for example in mini pages when used to compose legal pages.

On the automation of this task with a package, it would be interesting to know, I've done very shallow tests long time ago and I was not satisfied.

What you ask is possible to do in LaTeX, but it is not recommended. There is a tradition of publishing for more than five centuries that has embodied certain canons not on the whim or the imposition of a few, but by the reason and functionality proven over time.

In other words, do not indent the first line after a header, there is not need for it and no reason to justify it the sake of readability, which should be the reason why could do this. And ironically, is what would be most affected.

Although I think Aradnix is absolutely right with what he's saying at a conceptional level (you shouldn't use what you are asking for), I'll give you another possibility of realizing it.

I extended skpblack's answer and appended his \ind to \section, so don't have to call it manually. I used Werner's answer from How to append code to a section? to do this. 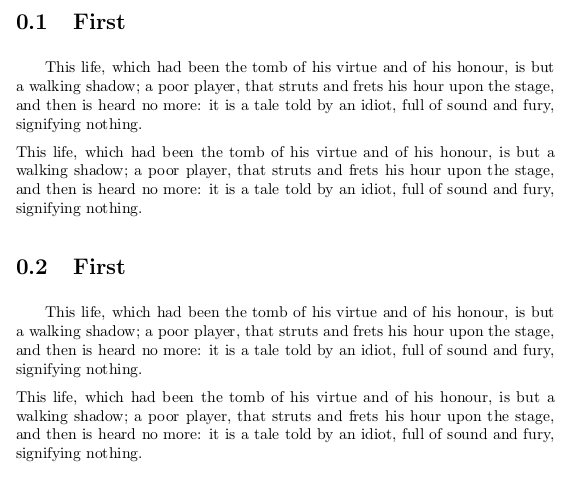 As I said: Follow Aradnix's description and avoid this strange way of indention. One rule I had to learn when I started using LaTeX, was only to change its defaults when I have a rational and justifyable reason for doing that. And I don't see any reason to do what you want to do. Or do you?

As you want to indent only the beginning of the section, I think it's easier to do it manually (since it is not at all paragraph), so I created a new command \ind (like \indent but it works with \oldparindent) for it and to copy the definitions of parskip.sty saving \parindent (in \oldparindent) before of change it. 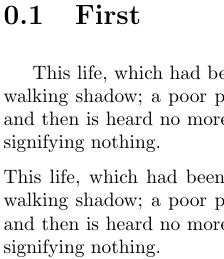 So what you should do is put \ind after each \section{}.

Not the answer you're looking for? Browse other questions tagged indentation parskip or ask your own question.

10
How to append code to a section?
3
Parindent not working for subsection paragraph
1
How to use an asterism to separate sections?