Is there an AucTeX extension which supports the TikZ syntax and that one of the tkz-collection as well?

UPDATE, 11/10/11: I've posted the code at https://github.com/blerner/auc-tikz -- the most recent version is auc-tikz-struct.el (the other files are older experimental versions). I haven't had time to update the code in a while, so if people want to tinker with the code, have at it! It's still rough, but it should sorta work if you'd like to try it out.

Per @egreg's request, a comment-turned-answer, and some elaboration on what's tricky about this prospect: I tried writing an AUCTeX TikZ highlighting plugin to address the first bullet point in your question, though I haven't had much time since my comment to work on it. The challenge in writing a syntax-highlighting mode (aka "font-lock" mode or "fontifying") for any part of emacs is that emacs uses regular expressions to match text. TikZ's grammar ... is not regular. In particular, the key=value portions are recursive, since you might have key={key=value,key=value}, as in

While elisp's regular expressions do let you have backreferences (and therefore aren't true regular expressions), font-lock doesn't let you refer to the recursively matched subgroups, so you can't get the font-lock behavior you need. I've tried several possible approaches:

The upshot is I have a new package in the works, called auc-tikz.el, that builds some highlighting functions that properly match the grammar of the key=value part of TikZ, including the recursive parts, and a hard-coded recognition of the \tikzset command as a trigger to create an auto-overlay. It looks like this, in my current color scheme: 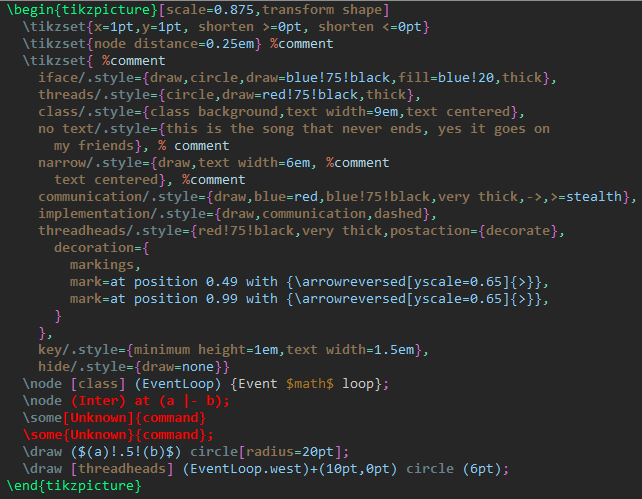 /Key/paths are recognized separately from the final /.command (as in iface/.style), so that you can see which settings are simple names (draw,fill=blue!20) and which are somewhat meta (iface/.style). Braces are purple when they delimit a TikZ option group (iface/.style={...}), but are light blue when they're part of a value (mark=at position...{...}). Comments are mostly supported, though they may still have some unintuitive behavior. Unknown commands are red, from the first parsing error up through the next uncommented semicolon.

The \node, \path and \draw (and any other) commands are not parsed properly, particularly not all the locations [options] can be interspersed in such commands. All the various coordinate forms are not parsed properly; I currently have (coord), ++(coord) and (coord)+(coord) support. Other forms, like ($(coord)!calc!(coord)$), are not yet supported. (They kinda sorta work, because the parser just looks for a balanced paren group; if you left out a closing $, it would mistakenly highlight as correct...)

"All" that remains to do is recognize the generic TikZ \macro ... ; syntax, and get the highlighting to refresh properly. And support nested environments, like pgfonlayer and scope and such. And speed the code up considerably; it's slow to parse even a smallish tikzpicture.

Not the answer you're looking for? Browse other questions tagged tikz-pgf emacs auctex tkz-collection or ask your own question.

112
A simpleton's guide to (…)TeX workflow with emacs
59
What is your favorite Emacs and/or AUCTeX command/trick?
0
AUCTeX and TikZ does not work in emacs for me : plz help?

5
What Unicode Font is Best Suited for Math Symbols using Font-Locking under Emacs?
13
How can I execute a macro for every node in TikZ?
5
How do you use MacVim for LaTeX?
98
PowerPoint's “Smart Art” for TikZ?
7
AUCTeX: How can I add syntax highlighting for custom cite commands?
4
AucTeX Emacs Compilation Problems
1
AUCTeX/ RefTeX: ignore files by extension
1
How to perform a two part “action” in AUCTeX?
4
Emacs, AUCTeX, RefTeX and biblatex's multicite commands