How can a style applied to a given node be inherited by all descendants of that node?

I'm using the graphs TikZ library to draw directed acyclic graphs. When I apply a particular style to a given node, I would like that style to be inherited by all descendants of the node in question.

To fix ideas, say I've defined a node style called alert that modifies the default node style. When I apply that alert style to a node locally, I would like all descendants of that node to inherit the style in question, without having to apply that style to all its descendants manually.

Here is an illustrative example: 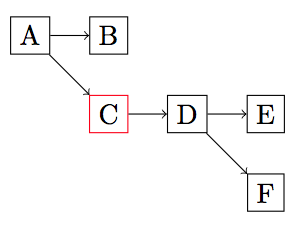 At the moment, alert is only applied to node C. However, by applying the alert style to node C, I would like all descendants of C (i.e. nodes D, E, and F) to inherit that style, without having to type

Is there a way of doing that?

Edit: Harish Kumar's approach can make my life much easier, but is not exactly what I want. Here is a more complex example illustrating what's missing:

Here, I'd like nodes D to H to inherit the alert style applied to their ancestor, node C. I could follow Harish's advice and write

but that would still force me to apply alert twice in the graph. I would like a particular style applied to one node to be inherited by all nodes further down the chain

Is that even possible? 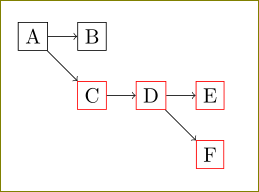 Not the answer you're looking for? Browse other questions tagged tikz-pgf tikz-styles graphs or ask your own question.

11
How to draw inside a TikZ node, using node style?
4
Defining styles that provide nested, parameterized styles with TikZ
12
Drawing rectilinear curves in Tikz, aka an Etch-a-Sketch drawing
6
Tikz node style that will programmatically modify the node content
6
How can I safely measure the width which a node will have, when the style to be applied may alter the font?
0
Change all nested nodes or subsequent node properties
2
Drawing a graph where nodes are graphs?
3
Tikz graph library with no node text