How to wrap lines correctly inside algorithmic

I am having problems displaying algorithms. The wrapping is really ugly and I can't, for the life of me, find a fix that doesn't involve manually tweaking the hell out of everything, to the point that I might as well scrap the crappy algorithm packages and write everything out in TeX.

Is there any way to properly indent the following

so that the output is similar to

algorithmicx obviously wasn't intended to manage paragraph-style text as part of pseudo code. You're going to have to do some of your own legwork in order for it to replicate your requirements: 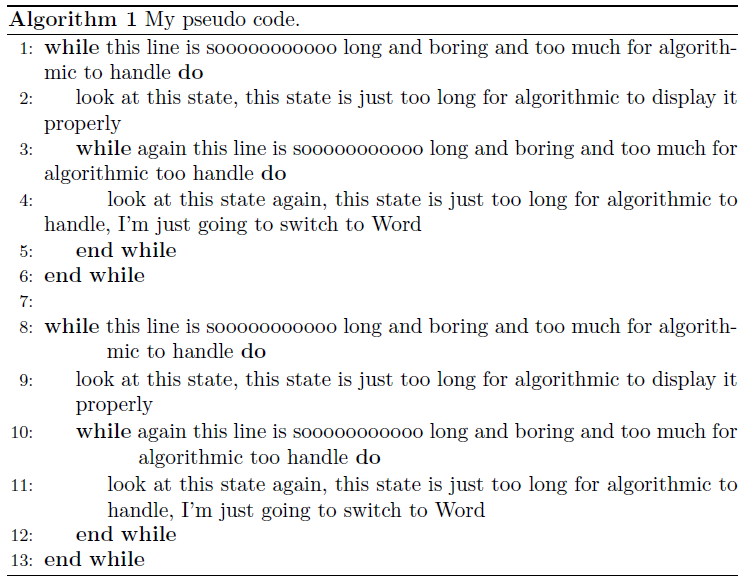 In the above code, \parWhile and \parState define the paragraph-style pseudo-code macros that you're after.

Use \hspace*{5mm} depending upon the space you need (change 5mm for your needs). It is easy and no need to write macros. It works fine with me.

Not the answer you're looking for? Browse other questions tagged indentation algorithmicx or ask your own question.

1
Why gap + indent after \\ and [return]
15
Algorithm and IEEEtran
6
Indentation of continued lines in algorithmicx
6
How change font family in algorithmic package
2
indent algorithmic outside of a block
3
Algorithmicx: controlling newline at the begin of a block using flags
2
How to wrap lines correctly inside algorithmic + more indentation for children lines