Can I automatically adjust the vertical alignment of square brackets in text?

Many roman and sans serif fonts, and the default LaTeX fonts in particular, seem to have a thing with square brackets: they descend a long distance below the baseline, probably in order to "catch" descenders. However, in a lot of cases this looks really odd (at least to me), especially when typesetting things like X[10]: 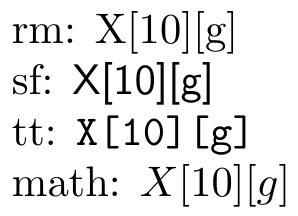 For that use case it looks a lot better to me (personally) when the square bracket is centered vertically around the midpoint of the capital letter. Except in the tt font where it already looked fine before and which got broken by the change. I can live with the fact that the g now looks slightly out of place, which was also the case before in the tt version. 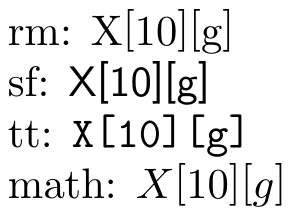 Now I ask more out of curiosity than out of need: Is there a document-based way (i.e. other than adjusting the font files) to shift all square brackets in the current scope (or in the whole document) up bit a certain amount (ideally depending on the current font family and size)? In my limited understanding such a thing would probably require a lot of black magic TeX hackery, breaking many things in the process... or maybe it would not. Maybe one of the wise TeX wizards around here knows the answer.

As David points out in the OP's comments, making the brackets active will break the use of many things, such as optional arguments. So this solution splits the difference. It creates the macros \shftON and \shftOFF to turn the vertically shifted brackets on and off by making them \active or not.

When \shftON is invoked, you can get the brackets you want with the [ and ] characters... and when \shftOFF is invoked, everything reverts to the normal way of doing things. In my MWE, I show this by first demonstrating the \shftON bracket appearances, and then, after turning \shftOFF, I show not only the original brackets in use, but also make use of an optional bracketed argument to show that they are not broken by this technique.

Not the answer you're looking for? Browse other questions tagged typography kerning or ask your own question.

5
How can I adjust the fine positioning of stackrel?
12
How to fake mid-caps with LaTeX? (I.e. How to stretch characters of a font?)
14
How to adjust the kerning around a forward slash in text
43
A ligature for she/he
5
How to adjust given lines automatically
1
Adjust vertical alignment of square brackets of biblatex numeric style
3
How can I ignore descenders for vertical text alignment?
2
Center Hyphen in Square Brackets
2
Left vertical alignment of characters