While trying to reproduce some boxplots using pgfplots (and analyzing samples automatically), I noticed that in some cases I was getting different plots from Matlab. I have left all the settings in default, which means that the thresholds for outliers and whiskers should be the same in both cases. (Thresholds for outliers by default are q1-1.5*(q3-q1) and q3+1.5*(q3-q1) where q1 and q3 are the 25th and the 75th percentiles respectively). However, Matlab and pgfplots generate plots with different whisker and outlier positions. 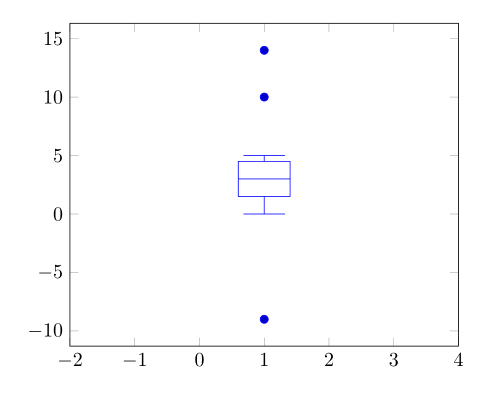 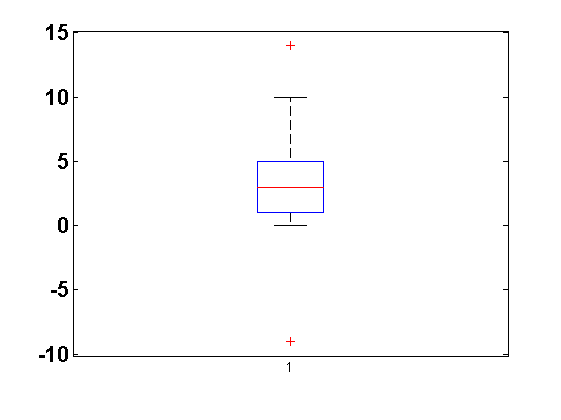 Following is the code and the data file that I am using to generate these plots:

Any idea why they generate different plots? Which one is correct?

There are at least two different factors potentially contributing to differences in the boxplots produced by Matlab and pgfplots.

There is a difference in the definitions of whiskers and outliers.

From the manual of pgfplots (I have emphasized the key fact):

lower whisker is the smallest data value which is larger than lower quartile−1.5 · IQR

upper whisker is the largest data value which is smaller than upper quartile+1.5 · IQR

From the manual of Matlab (emphasis added):

Points are drawn as outliers if they are larger than Q3+W*(Q3-Q1) or smaller than Q1-W*(Q3-Q1), where Q1 and Q3 are the 25th and 75th percentiles, respectively. The default value 1.5 corresponds to approximately +/- 2.7 sigma and 99.3 coverage if the data are normally distributed. The plotted whisker extends to the adjacent value, which is the most extreme data value that is not an outlier.

It would be all too easy to say that the box limits are the 1st and 3rd quartile (a.k.a. 25th and 75th percentile, a.k.a. quantiles with probabilities 0.25 and 0.75) and leave it at that. Alas, there are many methods for computing quantiles. Without going into too much detail, there are no less than 9 different quantile() method variants in R. For the example data set, these methods give 7 unique results for the pair of numbers (25th and 75th percentile). These are:

Matlab finds the box limits to be 1 and 5. According to @Jake (see comments), the limits in pgfplots are 1.5 and 4.5, which can also be approximately confirmed by looking at the picture attached by the original poster. Note that this corresponds to yet another definition of quantile. The pgfplots manual, Revision 1.11 (2014/08/04), states the following about the computation of quantiles:

How this works with the example data

Assuming what I wrote above is correct and everything works as documented, we can work through a boxplot of the example data from the perspective of both Matlab and pgfplots.

I cannot tell for sure which of the boxplot computation methods is better or correct. I can add another data point: In case of the example data, boxplot() in R gives the same result as Matlab.

One should also note that due to the limitations of computer arithmetics and the discrete nature of the whisker locations, different implementations using the same formula may also produce a different result depending on the data set.

Not the answer you're looking for? Browse other questions tagged pgfplots boxplot or ask your own question.

19
Simpler boxplots in pgfplots - is this possible?
7
Problems with whiskers and outliers in boxplot
2
Loop through table for boxplot prepared
9
How to prevent rounded and duplicated tick labels in pgfplots with fixed precision?
5
Unmodified boxplot with pgfplots
2
Is it possible to user-define the percentages for lower/upper whisper in boxplot of PGFPlots?
2
Sine function in pgfplots and MATLAB. Why are different results obtained?