Which font is the most comfortable for on-screen viewing?

Among fonts listed in The LaTeX font catalogue with math support, which one is the most comfortable to be viewed on the screen?

That's what Font hinting is. And here is a good example found in Google: 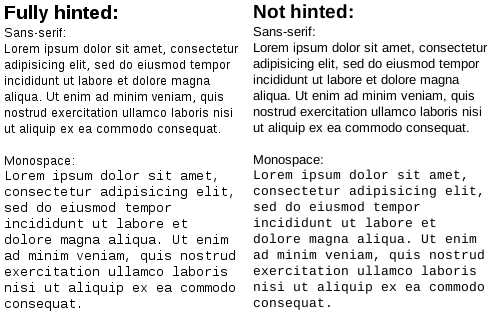 And here is a comparison between Adobe Reader (left) and Sumatra PDF (right):

Adobe Reader renders better, even if the font used (CM-Super) doesn't have the best hinting possible.

And yes, thats not a defect in the viewer, they print as seen from any reader. That means, it's good to use fonts with proven quality. Not to use something that in the last minute shows its hidden defects.

And finally the Sans Serif math. Can you easily read that? I can't. 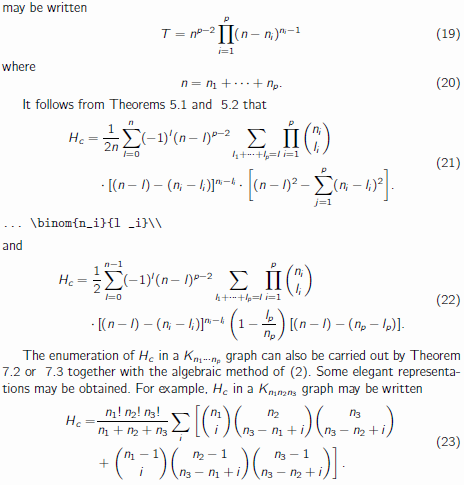 If the font is large enough, serif fonts are not an issue even on screen.

The predominant problem of serif fonts on screen is the rendering accurate of the tiny serifs without creating visual clutter. But with modern displays, modern font rendering techniques (ClearType anti-aliasing and proper hinting) and large fonts, this is not an issue any more.

The advice of using sans-serif fonts in favour of serif fonts is therefore outdated, and using serif fonts on screen has the same advantage that it has in print; namely,

[…] that serifs help guide the eye along the lines in large blocks of text. [Source]

The only potential problem is that not all fonts were designed with screens in mind, and are therefore poorly adapted to ClearType rendering. A properly hinted font mitigates this.

Next-generation displays (Apple’s Retina Display) promise to make even that obsolete: their resolution is so high that the naked eye cannot distinguish individual pixels, and text looks as smooth as in high-quality print1.

For now, though, most displays in use still have comparably low resolutions and require properly hinted fonts for best rendering. So, in summary (for now): Use a large font that was designed for on-screen usage. Serif or sans serif is irrelvant.

For inspiration, look at the free fonts listed at the Google Web Fonts directory, especially Vollkorn or the Droid Serif font which was particularly developed with small font size in mind.

1 Ironically, the article does pretty much the opposite: it uses a small font which, though developed for on-screen usage, contains hinting errors and looks smudged:

There are a couple of fonts that were designed for low-res devices, such as Charter (mathdesign), Utopia (fourier), Lucida Bright, etc. These fonts all have a large x-height and minimum thin lines. They normally print very well and are therefore very useful in PDF docs for onscreen viewing and printout.

Fonts to avoid for onscreen viewing are those with fine lines and smallish x-height such as Palatino (mathpazo) and the traditional Computer Modern LaTeX default.

For presentation material sans-serif fonts are mostly used and printouts are not an issue.

Some how the absence of tips in the sans case make it more accessible when displayed on the screen. BTW: this holds also for presentations.

I find euler fonts to be very good for on-screen math, perhaps combined with concrete fonts for text. Euler is not geometrically as austere as most other sans-serifs, but does not have too much tiny details of most serifs. I like it a lot for its handwritten blackboard shapes.

I am very picky on fonts for interface (menus, titles, tabs, icons, etc.)

The best font for interface and application software, have to be:

After many tests i have found these fonts very very good:

UPDATE - I hadn't noticed how bad fouriernc looks in Adobe Acrobat Reader. tgschola improves on it, but some characters still look weird in Acrobat. Currently I think the best font for on screen reading is Latin Modern Sans

I tried all fonts provided on tug.dk/FontCatalogue/seriffonts.html with TexLive and found \usepackage{fouriernc} very promising, but its titles don't seem to fit. Luckily that's not a problem if you're using KOMA classes (also see Andrew's comment):

This yields a more playful high contrast look, that still feels like LaTeX.

If you're looking for something more serious, the good old Times might be for you:

Not the answer you're looking for? Browse other questions tagged fonts screen or ask your own question.

15
Why shouldn't I use the mathdesign package?
3
Does TeX have a font family which is optimized for both screen and print?

6
Which LaTeX fonts can be practically considered as available on most platforms?
26
Is there a way to make standard LaTex PDF output look good *on screen* as well
51
Handwritten font with math support
28
What is going on with all these Times clones?
0
Screen-friendly layout for preview
3
Does TeX have a font family which is optimized for both screen and print?
3
Print name of the default math font?
9
What tips and tricks should I know when using the Georgia font in LaTeX?