New counter that can be referenced

I have created a method \makeExample that creates a new counter called example. Can you tell me how I can modify it, so that I can make references to the example counter? So that I for example can write: some text.... \vref{label} .....

The simplest modification to your code is to add an optional argument to \makeExample where you can put arbitrary code, such a \label. I post an example of this at the bottom, however I strongly suspect this not what you want. The sample you provide is setting up an mdframed enviornment and it would be easiest to use the theorem-like mechanism provide by the mdframed package as follows:

Here is the result the first modification would have given:

I think the first approach is much simpler.

When asking questions you should provide a full minimal working example (MWE), both in order to show what you are trying to do and to help others help you -- it is much easier to help some one if they give you something to work from. The MWE should start with a \documentclass statement, contain all of the packages that you want and then have \begin{document}...\end{document}. The MWE should compile and contain close to the minimal amount of code needed to explain/demonstrate what you are asking. This saves a lot of time for everyone.

In this case, it seems to me that you are simply trying to define an environment for displaying examples. If this is what you are trying to do then you are working too hard as you can just use \newtheorem{example}[section]{Eksempel}. A full MWE, complete with cross-referencing, is

Look at the documentation for the amsthm package to see how you can customise the theorem-like environments.

Edit As I mentioned to customise the style of Eksempel you should read the documentation for the amsthm package. If you add the lines:

then you get the style that you were trying to define:

Note that the \hfills for the "theorem head spec" centre the Eksempel heading.

If you are trying to do more than this then your code is still trying too hard because you do not need to define both the \newenvironment{example} and the \makeExample commands: environments are themselves commands. In this case you probably want something like

(I suggest deleting the \par and \medskips, however, as they look wrong to me.)

As you are using \refstepcounter you can use this command as in the MWE above with \label and \ref to create cross-references. This said, it's probably better to use \theexample in the definition of the environment and to add:

Finally, since you define the example counter to be a subcounter of section, I suspect that you really want:

This is a version with an automated label generation, but however, this might fail after resetting of the counter. 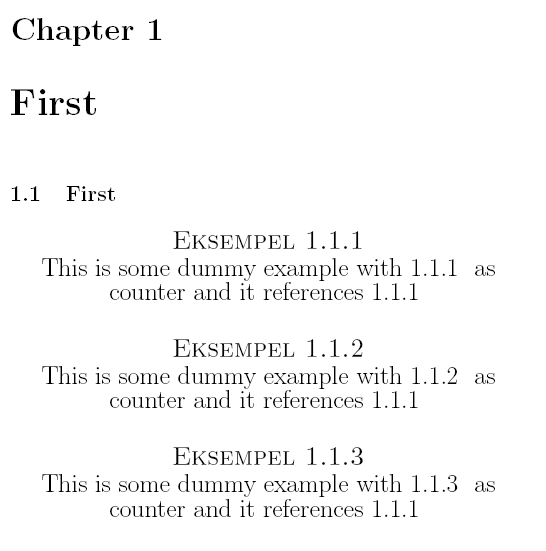 Not the answer you're looking for? Browse other questions tagged cross-referencing counters or ask your own question.

3
Figure refs stop working after I added a new counter
11
No room for a new \count with datatool
11
Counter increase with new page
5
`xr` - temporarily redefine `\label` for exporting section counter to sister document?
10
Arbitrary named counter, referenced
5
Referring to label and value of counter at that point
4
How create new counter that counts by order of appearance
6
How can I define my own sequence of symbols for a new counter style?
1
syllogism package new counter
1
Reset counter value within new paragraph