What is the problem with this stupid table?

LaTeX is good at typesetting math, but it's not clairvoyant: it doesn't know you want to typeset some math formula unless you tell it so.

Several commands can be used only in math mode and raising an error upon finding them outside that mode is the best way to tell the user something's amiss.

Indeed, the first error that is raised when typesetting your code is

which exactly means that TeX found a math command in an improper place. TeX's author could have programmed it so that it uses math mode for an out of place symbol, but this would easily lead to poor typesetting.

There's a big difference between

as shown in the following picture: 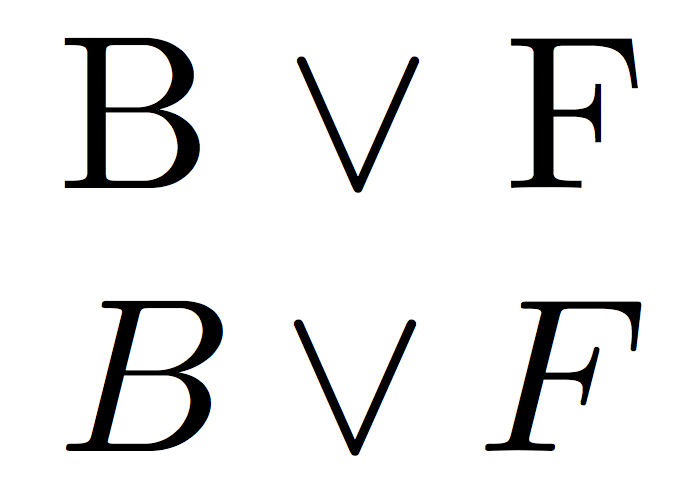 The main difference is the shape of the letters. Letters denoting mathematical variables have been typeset in italics for centuries and using math mode around the whole formula ensures this. Certain typographical traditions use upright type for uppercase variables, notably the French, and it's possible to set up TeX so that it follows this different style. In any case, you're guaranteed that the letters will be typeset as wished independently of the context, when found in a math formula.

Any good guide to LaTeX will tell you what are the commands that bring it in math mode; there are several, particularly if you do

so as to load a package specialized for math typesetting, which provides tens of environments and commands that solve many problems with complicated math formulas: multiline alignments, split equations, matrices, dots, whatever.

This said, what's the best way to typeset your table in which all cells should be in math mode? Easy, use math mode for the whole of it:

Note that \centering is a declaration that doesn't take an argument: it means “for the duration of the current environment, typeset in centered fashion”.

The array environment is the math analog to tabular: it must be issued in math mode, so it's surrounded by $ signs, and all cells will implicitly use math mode.

You might want to typeset “T” (for “true”, if I understand right your aim) in upright type, to mean it's not a variable. You can define

in the preamble and type the second line as

and your table would result in

Why using a long command instead of a single letter? Because it adds meaning to your input. That particular “T” is used with a very specific meaning (logical truth) that's different from any other uses of it. Better yet, if you change the definition in the preamble to

a single run of LaTeX will change all those T's (and only those that mean “true”) to a different symbol (that's frequently used by logicians, by the way, together with \bottom for “false”).

Defining macros for specific tasks is one of the most useful features of (La)TeX: this way your document will be as independent from a particular style as it can be; you don't hardcode a particular convention, so you remain free to change uniformly your convention if circumstances (read a picky referee or copy editor, for instance) so impose.