I'm using pandoc, which parses markdown into LaTeX. In this case I configured pandoc to use babel in spanish and wrote `"avg"` which is translated by pandoc as \texttt{"avg"}.

When I do this I obtain the first string in the next image: 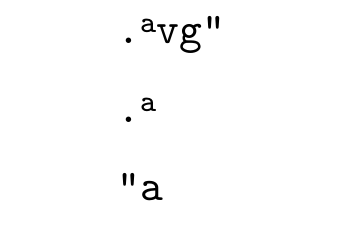 So I posted an Issue in pandoc's github. But it is unlikely to be solved if we don't know why LaTeX is behaving this way.

I think the solution is related to this post, but I don't understand much LaTeX.

This is a minimized code which produces the output of the image:

The behavior is readily explained by looking at Cuadro 2 in the documentation of babel-spanish:

This means that an input such as

will be rendered as

You can globally disable this by using the es-noshorthands option

but you can also just disable the " with

that will redefine the active " only in a \ttfamily context to produce just ". In normal contexts, the " shortcuts will still be available. 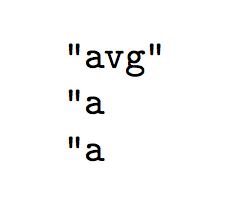 In babel use also option es-noshorthand. Your minimal example will look like:

And the output is: 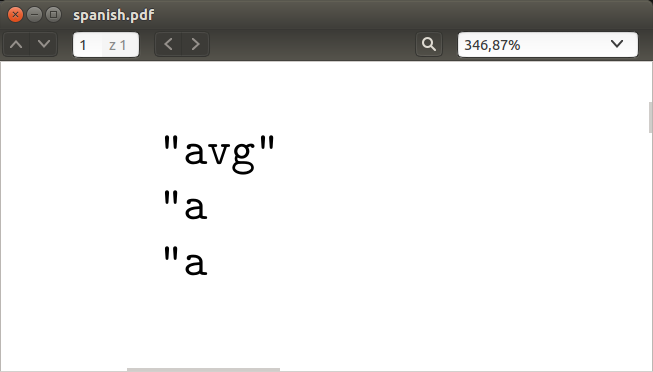 More of this is here.

Not the answer you're looking for? Browse other questions tagged babel typewriter pandoc spanish markdown or ask your own question.

13
Gobbling an argument if it starts with #
7
Adding a logo to a title in Pandoc's PDF output
7
Full-width figures with Pandoc
7
Can't make fancyhdr work with pandoc + yaml header
0
How to prevent word wrapping with 2 hyphens?
1
How can I automatically do \shorthandoff in all inline listings with pandoc?
2
How do I adapt a standard LaTeX template for Pandoc (in a Docker container, not using RStudio/knitr )
3
Biblatex reference list not translated to Bahasa Indonesia
3
How can I reformat a table? Using Markdown > Pandoc > PDF