What does the tilde character (~) do in math mode?

What effect does the tilde character ~ have in math mode? Is it the same non-breaking space that it is in text mode? Is it bad style to use ~ in math mode? I've seen it used in some examples but have not seen it explained in any of the usual LaTeX references.

Using ~ or \⍽ (control space, just in order to make it clear) in math mode is not equivalent, as the following example shows: 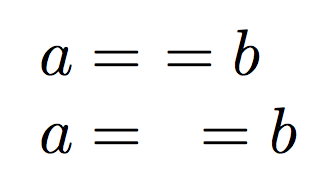 Why is that? Because the definition of ~ is

In the second case we have

because in math mode {} counts as an Ord atom. Thick spaces will be inserted at either side of the empty Ord atom.

Thus it's better to use \⍽ instead of ~, in order to avoid surprises. However, the usage should be limited to separating parts of a formula that need to be considered as words, typically in displays. There's no difference between

Just a question of personal preference, because either will use the interword space relative to the current font outside of math, without stretching or shrinking. For spacing math symbols the best is to use \mkern or \mskip (possibly the latter, for which amsmath provides the \mspace interface, analog to \hspace).

Note that in inline math mode \⍽\text{and}\⍽ and \text{⍽and⍽} are different, as the former inserts spaces that may participate to stretching and shrinking, whereas the latter inserts “frozen” spaces. However, something like

is more properly written as

so as to give TeX more chances to properly break the line.

Not the answer you're looking for? Browse other questions tagged math-mode spacing tilde or ask your own question.

3
How to properly handle non-breaking spaces in math mode?
2
Add spaces between numbers in set
4
what does tilde `~` do specifically?