This is an idle question, but neverthless, I think it's interesting.

Does TikZ have a simple way to implement a "z-level" specification. By this, I don't mean 3D drawing, I mean specifying which parts of the picture are on top of what.

and have the red circle appear on top of the blue one (since it has a higher z-level). I know I could just reverse the order, but I can imagine that being able to specify things this way round might make incremental changes to a TikZ picture in beamer easier by simplifying the overlay specifications...

I suppose you could do something with remember picture, but it seems a "z-level" key would be the easiest solution (from the end user perspective).

You can use the layers describe in section 113 Layered Graphics of the pgfmanual. You need to declare the layers first using \pgfdeclarelayer and then use them with \pgfsetlayers outside the picture. With the {pgfonlayer}{<layer name>} environment you can can wrap TikZ or PGF commands to be drawn on this layer. The background library provides a on background layer style for scopes, so it should be possible to define a zlevel style as well:

But you need to put all the commands into a scope.

Yes. They are called "layers". I've used this a few times in various solutions:

As have various others:

Update: In a desperate attempt to "out-TikZ" Martin, here's a version that works as a key on a single path. It works by a bit of sneaky hackery together with careful observation as to when particular commands get executed. We need to install some code at the beginning and the end of the path. The beginning is okay as TikZ options get parsed early on. The end is a little trickier and that's where the sneaky hackery comes in. Basically, the \tikz@path@do@at@end macro gets done, as it says, at the end. It occurs after an \endgroup and the keys on the path are examined inside that group, so at first sight it seems that there's no way for a key inside the group to hook in to that \tikz@path@do@at@end without making a global assignment (something I'm reluctant to do). But if we introduce a new \begingroup then the original \endgroup at the end of the TikZ path-setting routine no longer ends the main grouping but ends our internal grouping, thus allowing us access to \tikz@path@do@at@end. So long as we are careful and end the outer group, followed again by \tikz@path@do@at@end (which is now back to its original meaning) then we can put our layer ending code there.

with the result that both the red lines are behind the green rectangle.

(As with many of my hackery answers, this comes with a "use at own risk" warning, and is also as much about the hack as the specific application. Indeed, I'd been looking for a way to hook in to that \tikz@path@do@at@end macro for something else and this might just be how I can do it.)

Edit: (again) I don't know how "safe" modifying \tikz@path@do@at@end is so here's an alternative that uses \aftergroup instead. It uses the same idea of the hack: start a new group so that the existing \endgroup is taken as the end of the inner group. This is a replacement for the \pgfkeys bit in the previous example:

Update: As Bruce pointed out in the comments, on layer doesn't work within the \node command (though \path[on layer=back] node {node}; works). That's because \node[options] becomes \path node[options] and not \path[options] node so the hooks are in different places. After a bit of detective work, I found a hook to hang the closing bit of the layer command on. So \node[node on layer=back] {on back layer}; works. I still need to look a bit further to find something that works with \draw (0,0) -- node[put this on the back layer but not the path] {back} (8,0);.

(and no longer any need for \makeatletter!)

Update (2012-03-07): Revisiting this, I found that the node on layer was no longer working (if it ever did - I'm dubious now as I don't think that the TikZ code has changed). I have found a new set of hooks to hook into for the nodes. One significant advantage of the new approach is that it is possible to put nodes on a different level to their surrounding path. Rather neat, I thought.

(NB the commented out package is left in deliberately as it was very useful in figuring out what was going on. See How do I debug pgfkeys? for more details on that package.)

Here's the result of the above. In each case, the layering is happening on the left and not on the right. The fact that the left and right are different proves that something is being shifted from one layer to another. 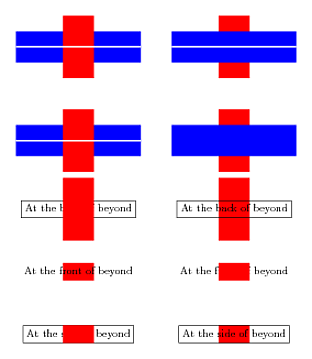 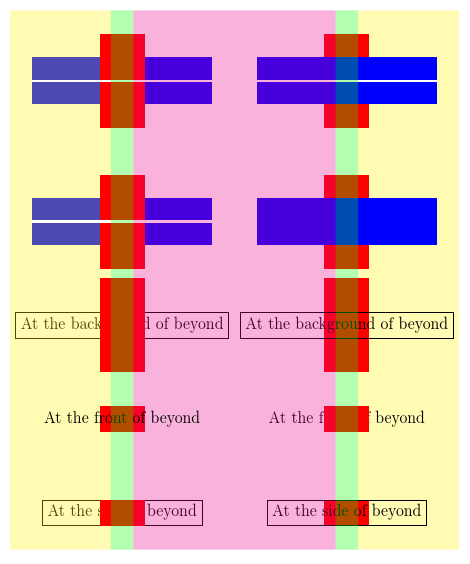 4
TikZ: "Inline" pgfonlayer?
2
tikz drawing layers?
1
Layer generation in TikZ
36
Drawing a hypergraph
36
Put a node behind another in a TikZ diagram
42
How to draw points in TikZ?
36
How do I debug pgfkeys?
13
How to fill a shape bounded by edge[bend right]?
12
Drawing a proper shadow for overlapping objects
17
Are boolean operations on TikZ shapes possible?
See more linked questions

11
dynamic clipping plane with TikZ
5
Tangent to circle given point on circle
5
How to find location of position of nodes in TikZ graph automatically to use?
1
Close scope for global options in a tikz-pgf path
6
Draw on background layer with mutiple tikzpictures, remember picture and overlay
10
Drawing C. elegans germline in Tikz
4
Filling intersecting ellipse with tikz
0
How to cross out an edge in a tikz tree
1
Issues after making a cuboid in tikz