A cookbook in LaTeX?

I am interested in making a cookbook in LaTeX. Each page will contain a recipe, including ingredients, instructions, and a photo of the finished food. Has this been done previously? Where do I start? Should I make my own document class for a cookbook? Does one exist? Any other ideas or pointers?

There are two existing classes/packages for this sort of thing:

Here some information given by the author in the documentation:

When I was looking for template for recipes, I found the cookybooky package … It looks very good, but I was unable to compile it correctly (e.g. I haven’t got the Lucida fonts). Also there are some packages which have to be downloaded by hand, because there are not available at CTAN. Other handicaps are the missing possibility to create a PDF-ﬁle directly and a recipe cannot be longer than a single page. So decided to take a look at the code. Step by step I replaced all critical parts. … There is no compatibility between xcookybooky and cookybooky, even the name is associating it. The reason for the naming is nearly similar design.

A comparison between xcookybooky and cookybooky (also taken from the documentation):

An example, also taken from the documentation (though it’s in German, the rest of it is in English): 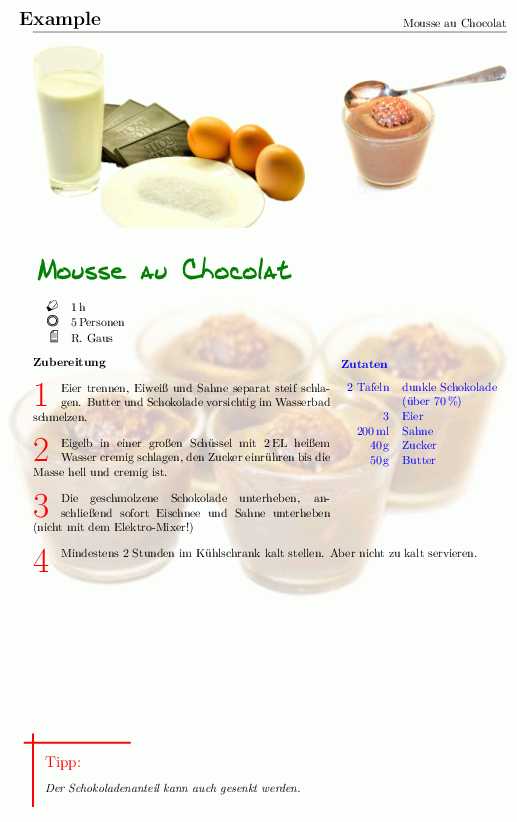 Note: Loading of the (in a strict meaning) non-free font package emerald is optional. Actually all is Freeware (Wikipedia link).

For the sake of completeness, take also a look cookingsymbol, which contains some symbols useful for recipes. It is created by the same author as xcookybooky. The symbols are metafont based and has less dependency than other packages. It is useful when you use any style other than xcookybooky and want to use the symbols. Here is a screenshot from documentation of cookingsymbol.

There is also a third LaTeX class, recipe. This formats recipes with an ingredients list first, followed by the instructions.

You could start by taking a look at the different options available in CTAN: Cooking recipes. The description of cookybooky sounds promising

Not the answer you're looking for? Browse other questions tagged document-classes book-design documentclass-writing or ask your own question.

4
Document Class for Recipes
21
LaTeX cookbook?
18
Where can I find some rich book classes?
15
An Aesthetically Pleasing Recipe Book Template
6
Learning how to use TeX for automatic layout of non-technical documents
0
Where does LaTeX loose its breath?

21
what TeX package(s) should I use for a Church Bulletin
11
Split a book into multiple volumes
5
Trying to create simple template for novice users
42
Document class for designing a book
4
How do I write a book with two 'authors', one on all left pages and one on all right pages?
2
How can I make a professional looking article layout?
1
Question about setting up workflow for making LaTeX documents containing mathematics
6
Can you help me optimize/improve this LaTeX book template for a short story anthology?
3
convert macro from preamble into a cls file