As far as I understood from the documentation, the starred version of \ac command and friends shall not mark acronym as used, thus it would not appear in the acronym list. But in the example below, \ac and \ac* behave the same. 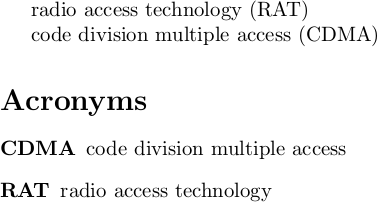 The manual is misleading or at least unclear. The starred versions do not prevent the acronyms from being written to the list of acronyms. Usage in this context means usage as far as the \ac macro is concerned (also, but this is probably not a good choice and maybe I should change it) as far as the single=true option is concerned.

If you want to ensure that an acronym is excluded from the list the easiest way seems to me to add a class to its properties and exclude the class from the list:

Not the answer you're looking for? Browse other questions tagged starred-version acro or ask your own question.