Print immediately before first word of paragraph, without altering its first line indentation?

Although my case can be generalised, perhaps it would be clearer if I describe a specific example.

I need to print a digit as a subscript, immediately to the left of the first line of each paragraph, but without disturbing its first line indentation.

The digit has to have the same spacing to the first letter as the default spacing of a footnote digit.

I have been trying to define a new command, but I am unable to keep the following text unaltered.

The following MWE shows what I mean:

I am aware that the command definition is primitive at best.

How can it be refined to print the digit immediately before the first word of paragraph, without altering its first line indentation?

I thought of using a floating box, but I can't make it work precisely.

Here is the MWE, EDITED to incorporate these changes into the \parnumber macro itself. The \ignorespaces allows you to either place a space after the \parnumber{1} invocation or not, without any ill effect. 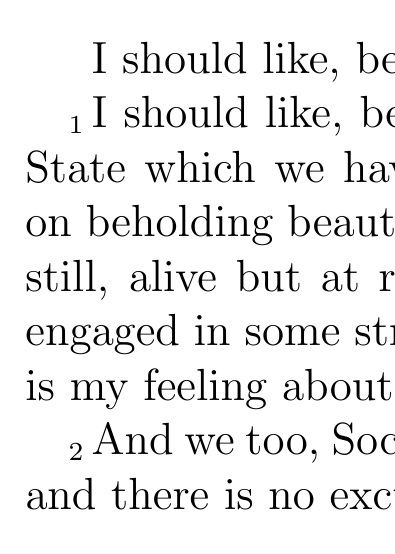 Not the answer you're looking for? Browse other questions tagged spacing indentation boxes or ask your own question.