I have a tabu table where the text in one column is larger than the text in the rest of the table. To avoid the text to come to close to the top rule I insert a strut (where the bottom has been smashed) in the relevant cell (as suggested here).

However, it seems that the \smash[b]{\strut} causes unintended extra vertical space to be inserted unless inserted inside the \textbf{}.

If I use an ordinary \strut (including the decending 0.3\baselineskip) or if I create the smashed strut manually using a \rule{0pt}{0.7\baselineskip} (which should have the same dimensions} it seems to work fine no matter where I place it.

Can somebody explain why it matters whether the \smash[b]{\strut} is inserted inside or outside a \textbf{} block?

Here is a simple example demonstrating the behaviour. First the result and then the LaTeX source. 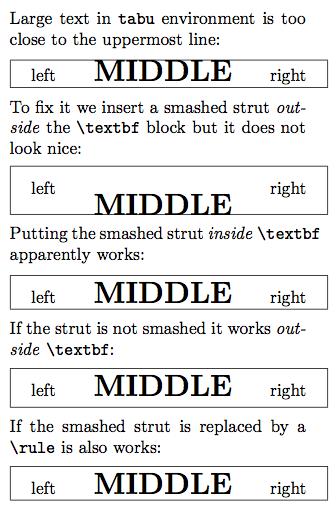 There is a fundamental difference between an X and a c column. The latter is typeset as if it were \makebox[<dimen>]{<text>} (the <dimen> is automatically computed, while the former is \parbox{<dimen>}{<text>} (the text will be centered because of the c option to X).

While a \smash gives no problem in a horizontal box (\makebox), it doesn't start a paragraph in a \parbox. Use \leavevmode before \smash in case of doubts.

As you noticed \rule works. A different workaround than using \smash[b] might indeed be

which might be a bit mysterious for the uninitiated.

The \strut works when inside \textbf because this macro starts a paragraph.

The input I'd prefer would be

In case you need this in several places, you could define a new command.

Not the answer you're looking for? Browse other questions tagged spacing tabu or ask your own question.