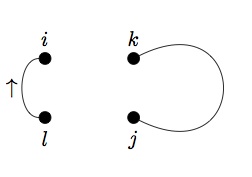 and a few other syntaxes but couldn't get it).

By the way, I'm a pretty new TikZ user, so if I'm doing anything else silly in this code, please let me know!

My final code, based on @Manuel's suggestion: 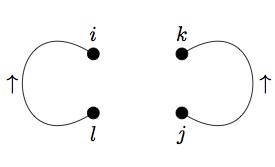 You can always place a node over the path and attach some label to it:

Here's a Metapost version for comparison. I've defined the two curves as path variables, so that I can then use the point x of y notation to place a label at a suitable point along the path.

However you can make rather sexier arrows by using subpath to draw an arbitrary part of the part shifted sideways a bit, like this:

42
How to draw graphs in LaTeX?

13
Rotate a node but not its content: the case of the ellipse decoration
17
How to define the default vertical distance between nodes?
6
how to add space between nodes in tikz?
13
tikz: draw a piece of a path between given coordinates
15
TikZ: Drawing an arc from an intersection to an intersection
9
Line up nested tikz enviroments or how to get rid of them
4
Tikz edge labels: positioning relative to direction of edge
1
Mark lines parallel with colored arrows
1
Draw arrows between nodes defined in a pic
2
Arrow between BTrees