I recall seeing some comments that using a \\ to start a new line is a really bad idea outside of tabular type of environments.

What are the reasons for this?

This is code I received when I was in charge of producing a conference proceedings volume (from my paper “Horrors in LaTeX: How to misuse LaTeX and make a copy editor unhappy”, TUGboat 26 (2005) n. 3; the paper contains other examples of bad uses of \\):

There is no generally good reason for using \\ outside the environments where it makes sense. I have used \\ in some places, in order to solve some very specific problem, but it's not really important to mention which ones.

The authors of that gem were trying to keep together pieces that they deemed worthy of being on the same line and, for the first line break, to get a cheap display.

Of course this is a blatantly exaggerated misuse, but it shows two things:

The copy shown above is as unreadable as some Web pages where the flowing of text is kept in no care. Texts prepared with word processors are often as bad.

When normal justified text is concerned, there is no reason whatsoever for breaking a line midway. If a line break is desired at some point, the correct command to use is \linebreak that will still fill the line instead of ending it abruptly. Signalling the end of a paragraph with \\ is wrong, because no indent will be inserted in the next line. Typesetting without paragraph indentation is a very bad habit, in my opinion (but I'm following authorities like Tschichold). Some people use spaced paragraphs (horrible, but it's just my opinion), others no indentation and no spacing (unbearable).

Even for this last case, ending a paragraph with \\ is wrong. Rather, the parameter \parfillskip should receive a non zero natural width, say

or, in Plain parlance

and still an empty line (or \par) should end a paragraph or the parameter wouldn't come into play. The setting would always leave at least 3em of blank space in the last line, giving readers a clue that a paragraph has ended.

Only in ragged right typesetting there are possible uses of \\, to force a break that TeX wouldn't take. However, such addition should be made during the final revision and certainly not when typing the manuscript. This doesn't invalidate my previous statement, that was about justified text. Moreover, ragged right typesetting is like being in a big flushleft environment and here \\ takes the place of \linebreak.

The objection that \\* prohibits a page break is sustained: the right command to use is \nopagebreak in the line above the point where we don't want a break.

Finally, (mis)using \\ for “leaving a blank line” is one of the worst errors: blank vertical space between paragraphs is very rarely necessary and, when needed, it is obtained with \medskip or \bigskip (the former is better, of course). A \\ by itself or \\ \\ invariably produce the Underfull \hbox message. “Fixing” it with ~\\ as somebody does deserves no comment.

I don't know if any of these are the reasons but: 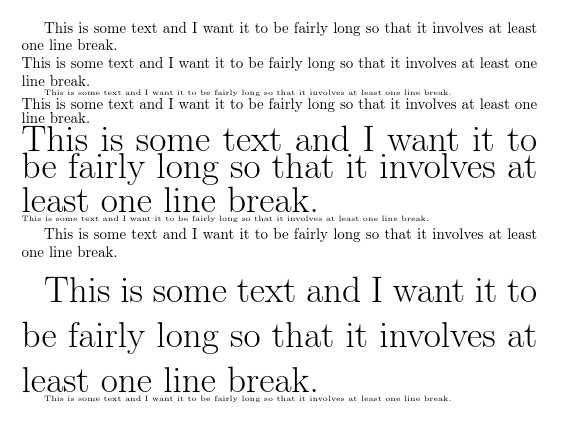 If you use microtype, you will get hanging punctuation, if appropriate, at the end of a paragraph but not if you end the paragraph with \\ (and the line breaks are different in this case):

When you use \\ then you force LaTeX to break the lines so there would be underfull and overfull boxes (bad boxes) in a lot of cases. There may be other reasons too that I haven't heard of yet, but if you consistently use \\ then you are going to see a lot of bad boxes!

It is only an example, showing, how bad it can be.

stops with an error.

Not the answer you're looking for? Browse other questions tagged paragraphs or ask your own question.

207
When to use \par and when \\, \newline, or blank lines
34
Best choice between using \\ or leaving space after each paragraph to end the paragraph
2
linebreak and pagebreak wherever I want with justified margins

10
Why do I need to use \paragraph{} after a \section{} to get correct indenting whereas a blank line suffices for subsequent paragraphs?
3
How to have indented text in ntheorem environment without a newline at the beginning?
8
safe places to skip lines in the source
4
Separating some paragraphs with a blank line, and other paragraphs without a blank line?
2
Is it true that when using \newline to stay in horizontal mode, the information will be on the same page?
9
Paragraph break only if insufficient space to end of line